Queenstown, New Zealand (7 July 2016) – Registration is about to open for The North Face® Frontier and event organisers Snow Sports NZ look forward to welcoming the world’s best big mountain skiers and snowboarders when competition gets underway at The Remarkables Ski Field on 22 August.

The North Face® Frontier is sanctioned as a Freeride World Qualifier competition and includes a two-star event and a four-star event. The Freeride World Tour is the worldwide circuit of freeride snowboarding and skiing with the best riders in the world competing on the most legendary and challenging alpine faces and the most renowned ski resorts across the world. The world qualification circuit is designed to develop the talent and skills of up-and-coming athletes. The score system is based on the star ranking of the qualifying events (1-4 stars) and with The North Face Frontier offering a four-star as well as a two-star event the calibre of competitors is expected to be high.

Formerly known as The North Face Freeski Open of NZ, for over a decade the world’s top skiers, including a strong New Zealand contingent, have used this event as a stepping stone to the Freeride World Tour. Wanaka local Sam Lee is the latest New Zealand athlete to make it through the qualifying ranks and earn his spot on the Freeride World Tour. Sam finished in second place behind Frenchman Sebastien Varlet at the 2015 Freeski Open of NZ.

“NZ 2015 was effectively my comeback season post ACL reconstruction,” explains Sam. “I took a full speed approach, but kept everything within my limits and was able to come away with second place behind Frenchman Sebastien Varlet at the Freeski Open of NZ.  I consider that run to be one of my best ever comp runs.  It set me up with an excellent confidence booster for my European season and the result turned out to be one of my top three results that determined my ranking and ultimately would qualify me for the Freeride World Tour in 2017.”

Until 2015 The NZ Open was a freeski-only event. In 2015 snowboarders were also invited to compete and the overwhelmingly positive response made it an easy decision to keep the snowboard competition in the new format The North Face Frontier.

"What this competition has evolved into today is incredible,” says Head Judge Dion Newport. “The North Face Frontier is at the highest level of Freeride World Qualifier events. With two -star and four-star points up for grabs we're expecting a good international turnout to challenge our legendary Kiwis. It has become a rite of passage for NZ freeskiers to compete at the Remarkables, Queenstown and it's a pleasure to have snowboarders competing again this year.”

While The Remarkables Ski Field offers fantastic variety of terrain for all levels of skiers and snowboarders from beginner to expert, The North Face Frontier competitors will be heading for some of the most challenging and visually spectacular areas on the mountain. The two-star competition is scheduled to take place in Shadow Basin and the four-star competition in the Alta Chutes.

“We are pleased to welcome athletes from New Zealand and overseas to compete on the exceptional terrain we have at The Remarkables,” says Ski Area Manager Ross Lawrence. “It is always a highlight to see what these athletes can achieve on some very challenging terrain and there’s excellent viewing for spectators to watch at both competition venues.”

Image: Andrew Wylie competes in the 2015 The North Face® Freeski of NZ Qualifier 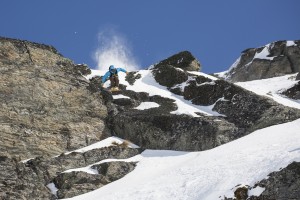 5 years ago
Freeride, The North Face Frontier, Freeski Open of NZ, The Remarkables