Quebec City, Canada (9 February 2017) – From California to Quebec, the Cardrona NZ Park and Pipe Team has travelled to North America's east coast to compete in slopestyle and big air World Cup competition taking place from February 9 to 12, 2017. Competition got off to a good start today with Tiarn Collins (Queenstown) and Zoi Sadowski Synnott (Wanaka) qualifying for finals in the Snowboard Big Air and Jossi Wells (Wanaka) through in the Freeski Slopestyle.

In a busy day of competition, the Big Air action took place in downtown Quebec City, while Stoneham Mountain Resort played host to the Slopestyle competition.

In the snowboard heats Zoi placed fifth from 28 female competitors, with the top six female competitors making the cut for finals. Placing sixth in his heat, Tiarn progressed through to the men’s semi-finals where he achieved his highest score to date in a Big Air World Cup to put him in second place and in to the final.

Carlos Garcia Knight landed a flawless front 10 chicken salad scoring 71.5 points but in the stacked field it was only enough to place 22nd overall and he did not progress to semi-finals. 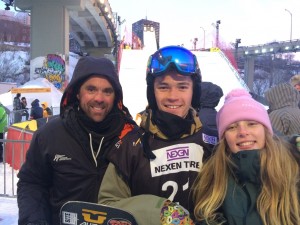