The 2018/19 northern hemisphere season is off to a strong start for the Cardrona NZ Park and Pipe team with freeskier Finn Bilous  finishing eighth in the Big Air World Cup finals held in Modena, Italy overnight, matching the result of team mate Tiarn Collins in the snowboard event a day earlier.

With a bronze medal already in the bag from the first World Cup of the season, held at the NZ’s team home resort of Cardrona in August, Finn was primed for competition, albeit with a slightly different twist.

“This was only my second time competing in a city Big Air and my first finals under the lights, so I was hyped to be riding in that electric environment,” he explains.

One of the biggest Big Air jumps seen on the World Cup circuit so far, the man-made structure of steel and snow stood 46m tall and 130m long, with the steep, narrow drop in adding to the challenge.

The start list featured all the sport’s big names, including crystal globe winners Christian Nummedal (Canada) and Henrik Harlaut (Sweden) leaving no doubt that Finn would have to bring the heat for the qualifying round. After crashing a switch right triple 1260 safety on the first hit he managed to stick it perfectly on the second try, qualifying for finals third in his heat.

Eyeing a potential podium, Finn went all out for finals and wanted to do a forwards right triple 1440 safety. He started with a switch 1260, crashed on the first hit but landed it perfectly on the second run. On the third hit he went for the forwards triple 1440 but just under rotated and received a low score which would see him finish eighth overall.

“I was really happy to make it through to the finals after two heavy qualification heats,” said Finn. “I decided to go all in for finals and try to put down two triple cork variations for my jumps. I was gutted to only be able to put down one of my triples; however, I went in to the finals with an all-or-nothing mentality so I’m happy to have given it a good crack tonight.”

NZ’s Margaux Hackett (Queenstown) finished 11th in the ladies’ Big Air, playing it safe to ensure a landed first run before trying a more technical misty 7 safety on her second but crashing out. 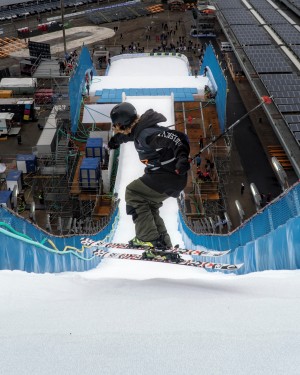