Yesterday’s bronze medallist in the Men’s Downhill Sitting event, Corey Peters, has finished just outside the Top 10 in 11th during today’s hugely competitive Men’s Super-G Sitting event. The event was won in stunning fashion by Canada’s Kurt Oatway, who catapulted his way from a world ranking of 16th to win in a time 1:25.83, finishing ahead of world number 1 and winner of yesterday’s Men’s Downhill Sitting event, Andrew Kurka of the USA. Frederic Francois of France took bronze, another significant mover, up from a world ranking of 14th. Just 3 seconds separated the top 12 finishers, and 12.5 seconds across the whole field. The field was so competitive that the Sochi 2014 gold and silver medallists, Akira Kano and Morii Taiki both from Japan did not get close the podium finishing 5th and 8th respectively in PyeongChang 2018.

Peters said: “Obviously not the result I wanted today. Conditions where quite bumpy out there and I just took the over skied the line and took it a little bit too wide on too many gates which costs you time. But that is just ski racing and there is a lot of variables involved. So, I’ll take this and move forward. I have a few days off now and will get some training in for the Giant Slalom and of course be watching and supporting Carl and Adam, which I’m really looking forward to seeing how they go.”

Peters entered the Super-G as one of the favourites, with a world ranking of 3 and a recent gold in the 2018 World Para Alpine Skiing Cup in the USA. Increasing temperatures in PyeongChang over the past few days saw course conditions deteriorate during the afternoon’s competitions, with several huge tumbles leading to 10 DNFs from amongst 33 starters.

Fellow team mate Adam Hall did exceptionally well to remain in 10th place in the Men’s Super-G Standing event today, just on 5 seconds behind the 1:24.83 gold medal time set by Theo Gmur of Switzerland – also winner of Hall’s Men’s Downhill Standing event, yesterday. Hall entered the event ranked 14th in the world, today beating 5 out of the 13 Para alpine skiers above him in the world rankings. Hall took on the 34-strong field with an outside chance, given two recent gold medals at the 2018 World Para Alpine Skiing Cup in the USA.

He remained philosophical on the finish line, with his favoured Men’s Super Combined and Men’s Slalom events still to come on Tuesday and Wednesday. Hall was a DNF at Sochi 2014.

Hall said: “It was great to get another start under the belt and just being here representing New Zealand. It was a little sketchy on the course today as its getting a bit warmer. This is a course that if you make a mistake you are punished, it is not very forgiving. So you have to be as consistent as possible.”

He continued: “I feel as though I am at the strongest point I have ever been both physically and mentally right now. Today sets me up well along with yesterday’s good result for the Super Combined and Slalom. Tomorrow is a day off and will be a well deserved break with lots of recovery, watching Carl’s racing and supporting team Kiwi.” 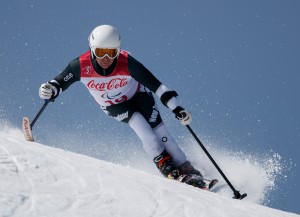