Cardrona, New Zealand (14 August 2018) – The Spy Optics FIS NZ Freestyle Open got underway at Cardrona Alpine Resort today with the snowboard and freeski slopestyle qualifiers. With snow starting to fall heavily and visibility deteriorating, only the women’s field was able to complete the scheduled two runs.

The event serves as a good warm up opportunity ahead of next month’s Audi quattro Winter Games NZ which will host the FIS Junior Freestyle Ski and Snowboard World Championships. For the snowboard events the NZ Freestyle Open is sanctioned by the World Rookie Tour as well as the International Ski Federation (FIS). The World Rookie Tour (WRT) is the largest youth snowboard series in the world with the world’s best U18 snowboarders competing for qualifying spots in the legendary 2019 World Rookie Tour Final in Austria.

Japanese rider Rina Yoshika topped the women’s snowboard field, spinning off all the rails and stomping a big backside 360 and frontside 540 off the last two jumps. Up and coming Kiwi rider Cool Wakushima had a solid qualifying run incorporating a backside and frontside 360 for second place and her spot in the finals.

USA athlete Eileen Gu was the top qualifier in women’s freeski, rewarded for confident spins off the rail features at the top of the course, and good amplitude and solid grabs on her jumps. New Zealand athlete Margaux Hackett snuck into the finals field, with a sixth-place finish in today’s qualifying rounds.

The male competitors were split across two heats for both freeski and snowboard but with weather conditions worsening only the competitors in heat one were able to put down a judged run. One run was sufficient to qualify the top six through to finals while heat two competitors will face an overnight wait before taking their qualifying run tomorrow (Wednesday).

US skier Torin Yater-Wallace – better known as a halfpipe competitor – has pegged himself as the man to beat, qualifying top of heat one and styling his way through the park with big amplitude, accentuated grabs and unique axis rotations.

A third place qualifying result for NZ’s Fraser McClellan puts him through to finals and on to the ‘one-to-watch’ list.

In the men’s snowboard heat one, a technical rail section followed by back to back sevens saw Korean rider Kwang Ki Lee awarded the top score. While NZ’s Rakai Tait – also a halfpipe specialist, and Olympian –qualified for finals in second place.

Competition is due to resume at Cardrona Alpine Resort tomorrow with the men’s heat two qualifying run to be held ahead of the men’s and women’s freeski and snowboard finals. The top six competitors in each heat will contest the finals. 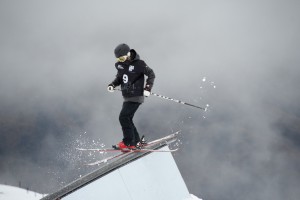