he opening ceremony of this year’s Audi quattro Winter Games NZ 2015 will include a dramatic, spectator-friendly dual slalom contest staged under floodlights and featuring top alpine skiers from around the world.

The exciting race format is part of a gala opening event at Coronet Peak ski field near Queenstown on Friday 21 August. Free to watch, hundreds of spectators, VIPs, athletes and coaches are expected to attend the opening that will also include a pōwhiri (Māori welcome) from local iwi Ngāi Tahu and the singing of the national anthem.

This will be the first time that the opening ceremony has taken place ‘on snow’ at one of the Games’ venues. Organisers are working with Coronet Peak management to create a party atmosphere in front of the Shirt Front race area with food and drink, live music and fireworks.

The dual night slalom will see some of the world’s best alpine skiers racing side-by-side for a share of $30,000 in prize money. There will also be races for representatives from the local business community and some surprise guests. Heats begin at 4.30pm with the opening ceremony at 6pm, followed by final rounds of the dual slalom.

One athlete already confirmed is Adam Žampa from Slovakia who won gold at the FIS Australia New Zealand Cup (ANC) giant slalom at Coronet Peak during Winter Games NZ 2013. Žampa was also the Games’ unofficial ‘poster boy’, with an image of him racing in 2011 used to promote the 2013 event.

“Races in New Zealand are always special and the night slalom will be great for people to watch because of the atmosphere. I’ve never raced parallel at night before and I hope it’s going to be so much fun,” he said.

“I love New Zealand so I always return with good feelings. See you there!”

Also during the Games’ opening weekend, Queenstown Ice Rink will host an afternoon pro-am curling competition on Saturday 22 August. The informal tournament will feature local personalities and business people teaming up with elite professional curlers. These will be drawn from those competing at the Winter Games NZ mixed doubles tournament that begins in Naseby, Central Otago the following Monday.

Other downtown entertainment during the 10-day event is centred on the Games Villages in Queenstown and Wanaka. This year, the Queenstown Village moves to a more central location on the Village Green and the Wanaka Village returns to the grounds of the Wanaka Hotel on Ardmore Street.

Both Villages will be open from mid-afternoon each day during the Games for après ski food and drinks with live music, adventure films and entertainment. They will also host medal ceremonies for that day's competition as well as special sessions where visitors can meet star athletes and watch replays of the action on big screens.

The Audi quattro Winter Games NZ 2015 take place from 21 to 30 August in Queenstown, Lake Wanaka and Naseby. All events are free to watch for spectators (ski pass required to access lifts) and will be shown free to air on TV3. More information is available at the event’s website www.wintergamesnz.kiwi and its social media channels. 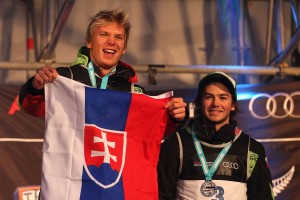