Verbier, Switzerland (28 March 2015) – The battle for the Freeride World Tour titles took place overnight (NZT) on the mythical 3222m (10570 ft) Bec des Rosses, all while celebrating 20 years of Xtreme. The much respected north face that has provided the stage for the Xtreme Verbier for twenty years, showed a new challenging side, dressed in a lighter snow cover this year.

Mentally focused but still appearing to be feeling the effects of a tweaked back suffered in Alaska last week NZ's Sam didn't quite hit the high note he was after and finished the day in seventh place.

"So today I just really wanted to go for the win," he explains. "I was feeling really good and while it wasn't the Bec de Rosses as we know it, the face still had some bug burly options. I went for a cork 3 up top and got it but unfortunately I missed the second part of my double drop to finish my run, the landing of the first just pushed me too far left and I couldn't hit my take off. But I very happy to have stomped a 3 and it was just such a great show to be apart of. I can't wait to do better next year."

Finishing within the top 16 riders on overall rankings Sam, along with fellow Kiwi Charlie Lyons, qualifies automatically for the FWT 2016.

Aurelien Ducroz (FRA) who has already won three times on this face and who was competing on an honorary wildcard did not let his fans down. He opened the men's skiing with a spectacular line below the highest start that set the expectations of both the judges and the crowd as to the awesomeness needed for a podium.

He has now set his print in the history books as the only skier to have won the Xtreme Verbier 4 times with a score of 88.50. “I'm just really pleased - a 4th victory for the 20th anniversary of the Xtreme! I have so much love for this face. I really feel good here,” Aurelien said emotionally. “I almost changed my line last minute and then with Reine we motivated each other and I went ahead with it. I'm so happy I don't know what to say...”

Just behind Aurelien with a score of 88.12 was another skier who has experience written all over him. Reine Barkered (SWE) went a little slower into the same line as Aurelien but quickly picked up the pace in this line leading to an enormous cliff that he landed perfectly in the exposed area, making it possible for him to take immediate control of the acceleration despite the very steep part of the face. Another A-run from the stomp master that he ended shooting down over the apron at the bottom.

The skier in the golden bib, George Rodney (USA) had quite a comfortable position to reach out for the World Champion title getting into today's contest. All he needed to be untouchable was a fifth place. He knew that he couldn't just play it safe though, especially having Jeremie Heitz (SUI) in his heels, hungry for a win on home turf.

George laid out with a big top air getting straight into the game and skied fast and strong down a technical line for a third place finish and a score of 87.75, bringing the rookie the World Champion title after a a very tight top of the field to day and a fantastic season on the FWT. 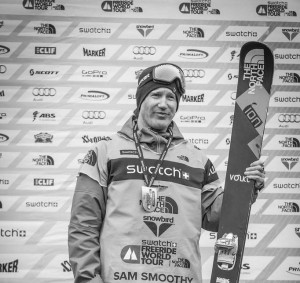