Montafon, Austria (26 February 2017) – New Zealand freeskier Sam Lee has claimed victory at a Freeride World Qualifier Tour event in Austria, adding to a string of top results and solidifying this season as the most successful of his career to date.

Sam, who this year made the cut to compete on the renowned Freeride World Tour (FWT) as one of the world’s top 25 male freeride ski athletes, was using the Open Faces Silvretta Montafon 3* competition as a warm up ahead of next week’s all-important Freeride World Tour stop in Fieberbrunn, Austria.

It’s crunch time on March 6th, for this third stop of the FWT as athletes get one last chance to qualify for the final tour stops in Haines, Alaska and Verbier, Switzerland as well as the upcoming 2018 season. After the Fieberbrunn event, a cut is made based on the competitors’ best two results of the 2017 season, reducing the field of fifty-one riders to just to twelve ski men, six ski women, six snowboard men, and four snowboard women. Sam is currently ranked seventh and in a strong position to qualify for the next stage.

“Montafon was fun, it was cool to do a comp with a little less pressure than the FWT,” says Sam. “Originally I just wanted to compete for the fun of it, plus it’s great practice with a week to go to the next FWT stop.

“I’m really happy with the run as the main focus was the last big cliff,” he explains. Judging is based on overall impression which takes into account the athlete’s line, fluidity, control, technique, air and style. Sam’s well-controlled run incorporated two big cliff drops to earn top points. Watch here

New Zealand’s Craig Murray also posted a strong result, finishing in seventh place. Murray was the 2016 Junior Freeride Tour Champion and this season has achieved two podium finishes with a win at the Freeride World Qualifier 4* event in Hochfugen, Austria in January and second place at the French Freeride Qualifiers in Les Arcs earlier this month. 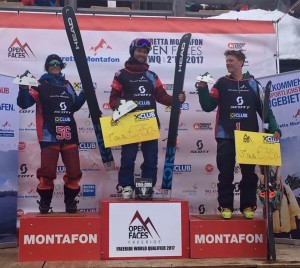