Lake Wanaka, New Zealand (18 August 2017) – The finals of the Australia New Zealand (ANC) Cup Slopestyle were held at Cardrona Alpine Resort near Wanaka today. Matthew Cox of Australia and Reira Iwabuchi of Japan were the winners of the men’s and women’s snowboard. Mee Hyun Lee of Korea won the women’s ski and Birk Ruud of Norway the men’s ski.

Competitors each had two runs through the course which comprised three rail features and three jumps, with only their top scoring run counting on the result sheet. The weather helped shake up results with several of the top qualifiers unable to land their runs in the gusty conditions and variable visibility.

Many competitors used this event as a warm up for the Audi quattro Winter Games NZ which get underway on the 25 August. As a FIS (International Ski Federation) sanctioned event, the competition also provided athletes with the chance to earn Olympic qualifying points and for men’s snowboard winner Matthew Cox, this was the main motivation to push for victory.

“I really wanted to win, I needed the points for Olympic qualifying and a win here opens up a lot of doors for me,” explained Cox.

“The weather was pretty bad this morning and I was worried that the competition wouldn’t go ahead. I decided just to get my first run down and landed a cab 9, front 7, back 7 and then thought, what next? I decided to go for broke and put down the run I really wanted. Everything just clicked and on my second run I landed cab 9, front 10, back 10.”

Iwabuchi led the field by over 20 points and her first run score would have been enough for the win. However, she still decided to up the level and landed a huge back 7 off the final jump in run two.

It was a similar story in the men’s ski field with Birk Ruud landing his first run perfectly and putting himself clearly ahead of the rest of field. However, the stand out trick came on the final jump of his second run when he threw down a triple cork 16. A backslide to cork 4 out with mute grab on the canon also distinguished Ruud from his competitors.

Young American Cody LaPlante also stood out on the canon with a misty 4 out followed by three doubles on the jump line to earn him second place. Japan’s Gen Sasaki finished third. 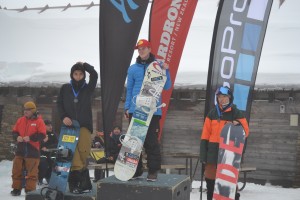