Early fog meant a slight delay to the start of today’s qualification heats for the FIS Freestyle Skiing World Cup Halfpipe at the Audi quattro Winter Games NZ today, but there was no obscuring the talent on show.

Fellow Canadians Mike Riddle and Justin Dorey won their men’s heats while Angeli Vanlaanen from Team USA took out the only women’s heat. They will be joined in tomorrow’s final by New Zealand freeskiers Lyndon Sheehan, Beau-James Wells and Janina Kuzma who all came through their heats with solid runs.

Lyndon Sheehan will split the Canadians in tomorrow’s final start list by qualifying second overall. Throwing down a dazzling first run that was awarded 85.60 by the judges, he said he tried something new for his hometown competition.

“I’m pretty stoked! I’ve been trying a switch left 1080 in training over at Breckenridge and this was the first time I put it into a comp run. I was able to go nice and high and my grabs went well. For tomorrow’s final I’ll just focus on laying down a more solid version of this run and hold those grabs for longer,” he said.

In the women’s heat, American Angeli Vanlaanen qualified first with an amazing score of 91.00 starting with back-to-back left and right 540 safety into a left 720 safety, switch right 360, mute grab and finishing with a left ally-oop 360 safety.

She finished a full three points ahead of Japan’s Ayana Onozuka with Nina Ragettli of Switzerland third with 85.20. The other qualifiers included New Zealand’s Janina Kuzma and US stars, Jamie Crane-Mauzy who finished second in halfpipe on the 2012-13 AFP World Tour, and Devin Logan who won all three freeskiing events at Winter Games NZ 2011 and was making her first competition appearance here after a long-term injury. 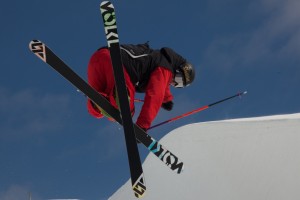