t was a day of blue skies and firm snow to start the last day of alpine skiing, kicking off at 8.45am with the men’s slalom.

Racing on ‘Outwide’ the courses for both men and women ran hard and fast, snow was perfect for alpine slalom racing. Scorching down the first run in the men was the ever consistent and super impressive yellow bib holder Adam Zampa of Slovakia, who led the field after a strong challenge from yesterday’s winner Marc Rochat, and Sandro Simonet both from Switzerland.

Moving on to the men’s second run a challenge was quietly laid down by NZ’s Adam Barwood sitting in 14th spot. Adam attacked the course at a blistering pace through the challenging steep middle section, then, unfortunately, came out of the course towards the bottom section.

It was Johannes Strolz of Austria who then sent a very clear message to the rest of the field of his intention to be on the podium, with a fast second run which put him in the lead right up to the moment Slovakia’s Adam Zampa crossed the finish line into first place for the men and became again the proud holder of the coveted ANC slalom series ‘yellow bib’.  A close second place today for Johannes Strolz of Austria who sent it on the very fast second course and in third place overall was the impressive flying Swiss cheese Marc Rochat, yesterday’s winner.

Running on a separate course on ‘Outwide’, the women got off to a flying start with many in the field hitting top gear in their skiing. The course claimed a few casualties at this pace which narrowed the field down to only 22 for the second run.

Leading the women’s field after the first run was the consistent Charlotte Chable of Switzerland, followed closely by Charlie Guest of GBR, Neja Dvornik of Slovenia and Piera Hudson of New Zealand.

With a smaller field heading into the women’s second run it was game on. A scorching fast run by Amelia Smart of Canada, nailing the fastest second run time in the women’s field pushed her through to third place overall. Switzerland’s Charlotte Chable finished strongly into second place and Charlie Guest of Great Britain was absolutely delighted to ski the race of her life and take top spot on the slalom podium. ‘It’s been two years since I had any kind of result like this – coming back from injuries and I’ve been working so hard in training, I just can’t believe this has happened! It feels so good!’ said Ladies' Slalom winner Charlie Guest.

The host nation ‘yellow bib’ in men’s slalom goes to Louis Muhlen-Schulte of Australia, as the top slalom points holder from the host nations NZ and AUS.

The alpine racing component of the Audi quattro NZ Winter Games NZ is now complete, with many of the New Zealand and international athletes now travelling up to Mount Hutt to compete in the ANC Continental Cup Super G races early next week, or to go on to further training blocks while the snow is good here in New Zealand. 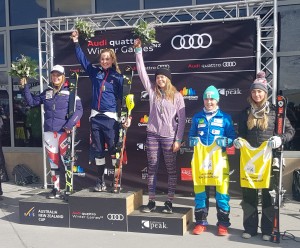