Wanlong, China (December 2018) – NZ ski racer Piera Hudson faced the toughest of weather conditions at Wanlong Ski Resort in China, battling temperatures of minus thirty-five degrees as well as strong winds, but managed to maintain a first run lead in the Giant Slalom and charge home for the win.

On the final day of the four-day Far East Cup race series, racers’ boots and helmets were cracking due to the cold conditions and faces had to be covered with protective tape to prevent frostbite.

“I’m really happy to take the win in China today and score a personal best,” said Hudson. “It was a whole new experience racing in -35 degrees so I really had to focus on staying warm and conserving my energy so I could get the job done.”

Hudson finished 0.86s ahead of Japan’s Sakurako Mukogawa, with Daria Krajewska finishing third. It is Hudson’s second medal of the series, following her third place result in Slalom on 5 December, along with another fourth place in Slalom and fifth in Giant Slalom.

She will now prepare for another FEC series which begins on 10 December in Taiwoo, China. 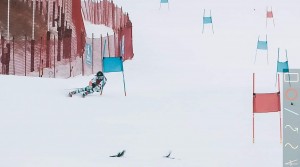