It was a hard fought battle for the podium in the men's race with Nick Prebble leading after the first run with a time of 56.45s and Willis Feasey fractions of a second behind on 56.46s. Willis came through on his second run with a time of 57.82 ahead of Nick in 58.33s. Britain's Jack Gower was the third fastest racer of the day. Adam Barwood, fifth overall, was the third fastest of the NZ racers.

"I'm extremely happy to defend my title," says Willis. "I think my mental process has improved which has helped my overall performance. The hard work is starting to pay off!"

In the women's field Eden Mackay posted the fastest first run with a time of 1:01.36s. Piera Hudson upped her game on the second run, her time of 59:28s leapfrogging her into first place for thr national title. Carole Bissig (SUI) finished second overall. Georgia Willinger was the second placed Kiwi and Eden Mackay third of the Kiwi women.

"I didn't ski at my best on the first run so knew I had to pull it out of the bag in run two," explains Piera. "I'm really pleased to take the win and defend my GS title." 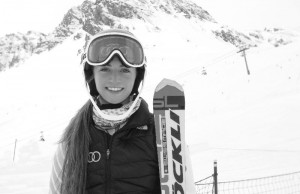