The National Championship Giant Slalom (GS) was the first event on the four-day schedule with the course set on the Outwide run.

Piera Hudson (Hawke’s Bay/Wanaka) was the first of the New Zealanders to take to the course, wearing bib four in a field of 25. Describing her own first run as ‘so-so’ and despite a few minor mistakes, Piera was nevertheless pleased to finish run one the fastest of the New Zealand women in 51.60s, behind leader Kristin Lysdahl of Norway in 50.16.

Skiing a little too conservatively for her own liking, Eliza Grigg (Canterbury) was the second fastest of the New Zealand women after run one in a time of 52.36s. First year FIS (International Ski Federation) racer Elizabeth Reid (Invercargill) was happy to make it safely through her first run, posting a time of 53.57s to put her in third place in the NZ women's field.

Nick Prebble (Christchurch) opened the racing in the 73-strong men’s field and posted a competitive time of 49.99s which would see him sitting as the second placed New Zealander by the end of the first run. Willis Feasey (Twizel) was the fastest New Zealand male on the first run, sitting fourth overall with a time of 49.27s behind leader Mike Engel of the US in 48.93s.

“I’m really happy with my first run but the job’s only half done,” commented Willis after his first run.

“I’m not super happy with my run,” he commented. “I need to be more aggressive with my second run.”

Run two got underway after a course reset with the fastest racers from run one last to take the course.

Determined to put her demons to rest having crashed out in the GS at National Champs for the past two years, Piera Hudson attacked her second run and finished with the national title under her belt in an overall time of 1:43.13s, putting her in fifth place overall.

“I’m really happy to take the national title,” she enthused after her race. “In the past I’ve been too focused on winning and it hasn’t paid off. Today I just treated it like any other race, just focused on my skiing and trusted that the results would come.”

Eliza Grigg (1:44.52s) and Elizabeth Reid (1:46.46s) held their form in the second run finishing the day in second and third place respectively for the National Championship rankings and 10th and 13th respectively overall.

Looking to ski a more aggressive run the second time around Adam Barwood improved his time on run two but not enough to defend his title. He finished as the second placed New Zealander and 12th overall with his time of 1:40.31s.

The men’s National Championship title went to a very happy Willis Feasey in a time of 1:39.46s, sixth overall.

“I made a few mistakes and slowed down a lot on the flat section but I’m still really happy, it’s always good to win a national title.”

Nick Prebble rounded out the New Zealand men’s podium for third place with a time of 1:40.63s, 14th overall. 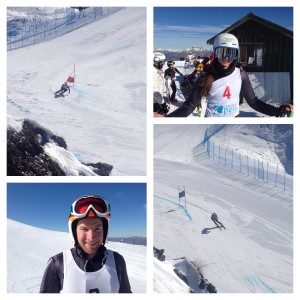