Aspen, USA (3 March 2016) – NZ ski racer Corey Peters (New Plymouth) is in contention for a World Cup globe after taking the win in the men’s super-G sitting at the IPC Alpine Skiing World Cup Finals in Aspen today. He is currently ranked second overall in super-G with one race left to run tomorrow.

Peters also won gold in the World Cup downhill on Tuesday (US time) but finished 10th in the second downhill race on Wednesday when his binding broke two gates from the finish. The win was enough to see him finish second overall on the downhill World Cup rankings.

“I’m super-happy with how the super-G race went today,” says Peters. “We have fixed the binding issue I had yesterday and I managed to ski mistake free today. The weather was perfect and the skis felt great. I’m hoping to carry this momentum into the final super-G tomorrow.”

“It doesn’t get any tighter than that!” he remarked.

Hall has already collected gold in slalom and gold and bronze in downhill at these World Cup finals. He finished third overall in the world cup downhill rankings and a good result in tomorrow’s super-G could also see him finish in the top three in overall super-G standings; he is currently ranked second equal with Australia’s Mitchell Gourlay.

“Let’s see what we can put down tomorrow, time to empty the fuel tanks!” says Hall. 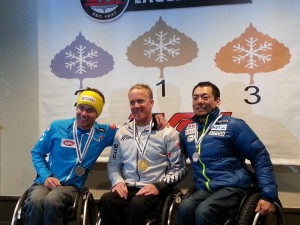