Are, Sweden (15 February 2015) – New Zealand’s Jamie Prebble (Christchurch) has posted a career best result with a sixth place finish at the Audi ski cross World Cup races in Are, Sweden.

Having come tantalisingly close to finals qualification at several races this season only to miss out by as little as 0.04seconds, Prebble was pleased to deliver the result he knew he was capable of in Sweden.

“I have building speed nicely the last month but a few things have not been going my way in the competitions. I had been fast in the training days prior so I had some good confidence leading into the race,” he explains.

The Kiwi racer knew he had his work cut out for him with 16 different nations competing and the Swedish, Canadians and French all looking particularly strong on the track.

“The course had some very technical sections and the snow was bullet proof ice. The racing was very close I stayed patient and then made passes to get through the rounds. My goal was a top 16 so I was rapt to make it into the small final and place 6th.”

Podiums went to Victor Oehling Norberg (SWE) in first, Jean Frederic Chapuis (FRA) second and Michael Forslund (SWE) third after one of the most exciting finals of the season so far.

Victor Oehling Norberg skied like a man possessed on the way to his third straight victory and Michael Forslund followed the lead of his impressive teammate all the way to his first ever World Cup podium.

The two teammates went head-to-head through all three of their heats on the way to the final, with Forslund actually besting Oehling Norberg in their quarter final heat that included a huge pass from the World Cup leader to advance to the next round.

In the finals, Oehling Norberg and Forslund were matched up against another pair of red-hot teammates, as Jean-Frederic Chapuis and Bastien Midol were both coming off solid results from last week's race in Arosa and were both skiing some crafty lines on their march to the big final.

In the final, Oehling Norberg shot out of the start gate straight into what looked like it might be a dominant lead, only to have Chapuis quickly reel him in and latch on to his tails. Chapuis shadowed Oehling Norberg through the entirety of the twisting Are course before setting himself up for a last-ditch pass attempt over the final roller.

The Frenchman got within half a ski of taking the lead, only for Oehling Norberg to step back on the gas and fly across the line for the win. 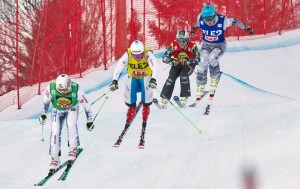