During the unveiling, PNZ was delighted to announce a new partnership in support of the Spirit of Gold® Collection Tour. The New Zealand Chambers of Commerce have agreed to stage more than 10 local events around the country ahead of Rio 2016, ensuring that everyone in New Zealand will have an opportunity to see the Portraits, meet Paralympians and learn more about Para-Sport. This series of events will be complemented by events being staged by PNZ major partners, including ACC, Sanford and Cadbury, and booked appearances at local community events and venues. It is expected that the Collection may visit in excess of 30 different locations in the course of the Tour.

Fiona Allan (Chief Executive, Paralympics New Zealand) said, “The London 2012 Paralympic Games saw Para-Sport explode into the public consciousness on a global level and millions of people tuned in to watch, fascinated by the professionalism and skill. In New Zealand we have a lot to be proud of – our team finished number one in the world for medals per capita – however - not many kiwis are actually fully aware of that! We think that touring the Spirit of Gold® Collection is a wonderful way to for the public to meet our Paralympians and Para-Athletes, get to know their names and faces, learn about their successes and hopefully, become interested in donating to support our initiative.”

Michael Barnett (Chief Executive, New Zealand Chambers of Commerce) said, “The Spirit of Gold® Collection is a wonderful project and we could not be more excited about supporting this through our local Chamber network. We identified a great opportunity to support the Paralympians and tell their story of individual commitment and attitude – attributes that sit comfortably with business.”

Amber Stephens (Artist) said, “Inspiration first struck when I first met Paralympian, Sophie Pascoe. I was immediately taken by Sophie’s unapologetic drive to meet her sporting potential.” She continues, “Following this meeting knew I had to use my artistic approach to capture the story and raise the profile of these amazing athletes. I visited Paralympics New Zealand in early 2015 and worked closely with them, and eventually the Spirit of Gold® Collection was born.”

Mary Fisher (London 2012 Paralympian and World Champion) said, “This is an exciting project to be involved in as we continue on our road to Rio 2016. This is a very innovative kiwi way of showing our Para-Athletes. I think it's amazing that from one meeting with Amber she was able to create an intimate portrait of each athlete this way. When it was unveiled for the first time this evening I was able to feel the painting with my fingers because it is so textured. I am looking forward to hearing people's feedback!”

Full list of Para-Athletes and Paralympians included in the Spirit of Gold® Collection: 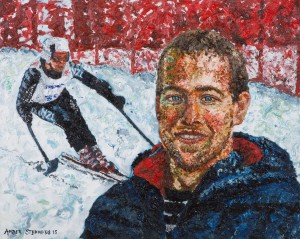