The decision was made last night in conjunction with Cardrona Alpine Resort to continue with the Obsidian Big Air today. The Winter Games NZ team moved into their Level 2 contingency plan and operating procedures, to ensure they provided a safe venue and event for all members of the Obsidian. Cardrona closed their ski fields to the public as they plan their response to the Level 2 environment and prepare their facilities.

At the closed venue the athletes acknowledged how appreciative they were to be allowed to still compete and perform on a world stage. The Obsidian has 21 of the best New Zealand athletes from Olympic medalists through to Freeride World Tour  winners. There are three snow sports legends as team leaders, with New Zealand’s most well-known snow sports athlete Jossi Wells being joined by one of the most versatile female freeskiers in the world Janina Kuzma and freeride pro Sam Smoothy, as the third Team Captain.

Team Jossi took out the top spot in each of the three categories today, with Nico Porteous, Margaux Hackett and Carlos Garcia Knight’s strong performances. This would normally have meant they were at the top of the overall standings for the day, but Team Kuzma strategically played their Joker card on the Big Air event. This card allows the team to gain double points on the day they use it. This pushed them in front with 160 points, to Team Wells’ 100 points and Team Smoothy in third with 60 points.

Nico Porteous, bronze medalist at PyeongChang 2018 Olympic Winter Games, was crowned overall Men’s Freeski Big Air Champion on a bluebird day. “My day was off the charts. I haven’t had a day like this for so long. It was unbelievable,” said Porteous. “I ended up coming out and doing tricks I have only done twice before in my life. Beyond stoked to be standing on that top podium.” Winning with a left double 16 safety, right double 16 mute combo.

Jackson Wells, 2018 Olympian and the youngest of the Wells brothers, showed consistency across all his tricks and came in second place. Winter Games NZ 2018 World Cup Big Air bronze medallist, Finn Bilous, rounded off the Men’s Freeski podium in third place with a huge performance. He stomped a right double cork 1440 with a safety grab which was very stylish and went for the triple cork but was not able to land either attempt.

Margaux Hackett, World Cup Big Air athlete, took first place and blew the women’s field apart with her right cork 900 with a tail grab and her switch right misty 900. “It was really cool battling it out with Zoi (Sadowski-Synnott).” The jam format pitted Hackett against the snowboard women and freeski women in one category.

Jess Hotter (Freeride World Tour podium athlete) boosted her way into second place with some huge straight airs and solid grabs. Zoi Sadowski-Synnott was here to win and went all out attempting a backside double 1080 but unfortunately just couldn’t find her feet today.

Tiarn Collins took out second and had the stand out trick of the day, a cab double cork 1440, but with our jam format judging criteria, one awesome trick is not enough to take the top spot. Up and coming Mitchell Davern was right on Collins and Garcia Knight’s tail landing the same two tricks as Garcia Knight, they were unfortunately not as clean.
⁠
The Winter Games NZ Obsidian is being run in a weather window between the 10 – 20 August, with the next predicted event being the Freeride on Saturday 15 August. 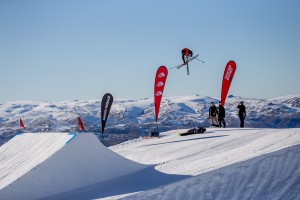