The men’s heat two competitors first had to complete their qualifying runs with the top six moving on to finals. The judges had their work cut out for them with some very close scores at the top of the table setting the scene for a tight final.

Japan’s Ryo Aizawa qualified top in snowboard with a technical rail section, huge cab 9 on jump one and backside 10 on the last jump. Snapping at his heels were compatriot Yuto Yamada and Korean rider Minsik Lee who also threw down back 10s on the last jump.

In the finals, US skier Eileen Gu had another good day at the office, looking strong and confident with a technical rail line and finishing with a stylish back to back 720 combo for the win.

“I’m really happy to put a run down and I’m stoked on my first rail trick,” said Gu. “ I fell pretty hard on my switch-two-continuing-two a few days ago so it was really exciting to get that trick today, I’m just really happy with how everything went.”

Kokone Kondo (JPN) was a close second, also with a technical rail section and well-executed jumps. Kirsty Muir (GBR) rounded out the podium in third.

Rina Yoshika (JPN), the stand out performer in qualifying, won the women’s snowboard final, impressing the judging panel with stylish rail slides before spinning and grabbing on all of the jumps. Maria Hidalgo (ESP) finished in second with NZ rider Cool Wakushima (Queenstown) taking a third-place finish. As the top scoring U18 snowboarder Wakushimal also claimed the World Rookie Tour title. The World Rookie Tour (WRT) is the largest youth snowboard series in the world with the world’s best U18 snowboarders competing for qualifying spots in the legendary 2019 World Rookie Tour Final in Austria.

“I wanted to spin all three of the jumps, that was my goal and I stomped it,” said Wakushima. “It’s my first time competing at this level event, I was a little bit nervous but excited at the same time. I can’t wait to go over to Austria (for the World Rookie Tour Finals).”

The men’s snowboard podium was almost a repeat of the morning’s heat two qualifying round with just a slight change to the order. Ryo Aizawa claimed the win with his unique and creative rail tricks and a huge backside 1260 on the last jump.

NZ rider Rakai Tait put down a solid competition run but lost points for a slight hand drag on his back dub 10 and finished in fifth.

The men’s ski final saw an impressively high level of competition with very little separating the podium place-getters. Taisei Yamamoto (JPN) delivered the full package – smooth rails, huge amplitude, good variety of tricks and well-held grabs - throwing down on every feature and skiing away with the win.

Torin Yater-Wallace (USA,) one of the world’s most medalled halfpipe skiers, proved his skills in the park today with a well-executed run which kept the judges counting right to the last minute as he spun a right dub 14 of the final jump and landed in second place. Ryan Stevenson (USA) finished third.

“I’m super excited,” said yater-Wallace. “Being a halfpipe skier, it’s the first slopestyle event I’ve signed up for in four plus years, I’m super hyped how the event went. This is what I’ve always wanted to do. After a number of years skiing pipe I’m finally making the switch I’ve always wanted to. I was just going in having fun and it went well.”

Competition continues at Cardrona Alpine Resort tomorrow with the freeski and snowboard halfpipe. 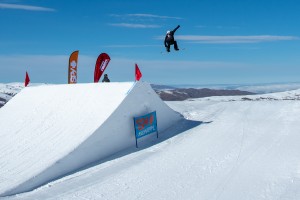