Taylor Rapley 21 (Queenstown) and Adam Barwood 20 (Queenstown) have been named the 2012 New Zealand National Ski champions after the titles were decided over just two disciplines, giant slalom and slalom, following the cancellation of the national Super G at Mt Hutt early in September.

The trophies were awarded to Rapley and Barwood at a special presentation in Wanaka on Saturday.

Rapley defended her 2011 women’s national title this season and won both the giant slalom and slalom titles at Coronet Peak (August 30 &31) competing in a strong international field.

She is pleased to have retained the title although disappointed the Super G had to be cancelled in a period of bad weather which also saw the abandonment of the Australia New Zealand Cup (ANC) finals at Mt Hutt.

“Winning the national title is always a bonus. It’s really cool to be considered a national champ in your sport. But what is most important to me personally is how I perform on the day and if I skied to my potential. I skied better in the giant slalom than I had been skiing all season so I was satisfied with that and felt I deserved the result.”

Rapley, whose best world ranking is 376 in slalom, has been offered an athletics scholarship at the University of Vermont which she will take up in January next year.

“Skiing NCCA (National College Athletic Association) has been a goal of mine for several years so I am very excited about it. The University of Vermont ski team is a very strong team and won the National College Championship last year. Being at the college will definitely push me out of my comfort zone and be good for my skiing.”

“I am most grateful for the support from the Masters’ group and the help it provides with my costs.”

Barwood won the men’s slalom title and was placed third in the giant slalom and his combined race points giving him the overall national title.

The giant slalom title was won by Ben Griffin 25 (Ohakune) and Nick Prebble 19 (Christchurch) was runner-up.

Barwood’s combined national title, the first time he has won it, comes following a solid season of results in the Northern Hemisphere when he was ranked amongst the top juniors in every race he started in.

His coach Guenther Birgmann of the Treble Cone Racing Academy (TCRA) says Barwood competed alongside elite athletes who race in NCCA, Nor-Am and World Cup events and demonstrated both a strong competitiveness and consistency.

Barwood says his New Zealand season “has had its ups and downs. But I am happy with how it went in the end and very pleased to win the national title for the first time.”

He is ranked 522 in the world in giant slalom and 571 in slalom and is looking forward to the upcoming Northern Hemisphere season where his goal is to lower his FIS points further in all disciplines.

“I will head to Colorado at the beginning of November to join Guenther Birgmann’s new Treble Cone Racing Academy USA. I also plan to go to Europe and race in the World Championships in Austria.”

The National Youth Series alpine ski titles were decided last weekend (September 28 % 29) after the finals, which included a Super G, giant slalom and slalom were held at Cardrona.

The K1 titles were won by Teggan Brown (Ohau) and Ben Richards (Wellington) and the K2 champions are Elizabeth Reid (Invercargill) and Nick Gemmell (Christchurch). 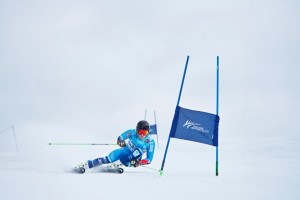