The 2020 Snowvision NZ Alpine Youth Champions were crowned yesterday (Saturday 26 September) after an action packed day of both Slalom and Giant Slalom racing at Cardrona Alpine Resort. The titles were awarded to:

Hemi Meikle (U16 Boy’s Champion) was the top New Zealand male in his division, finishing in second place in Slalom and third place in Giant Slalom. Sammie Packer (of Australia) took the win in both disciplines but only New Zealand citizens are eligible for the Snowvision Youth Championship titles.

The Snowvision Youth Championships was scheduled to be a three day event with each of the three disciplines (Slalom, Giant Slalom and Super G), held on a separate day between the 25th and the 27th of September. Due to unfavourable snow conditions on Friday the 25th of September and the weather bomb forecasted to hit New Zealand on Sunday the 27th of September the Race Organising Committee, Wanaka Ski and Snowsports Club, took the decision to race both Slalom and Giant Slalom on Saturday and scratch Super G without impacting the Championship. 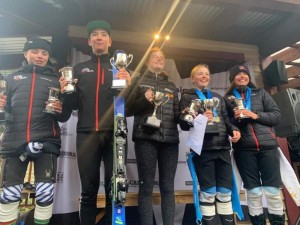