Nico Porteous (Wānaka, 20) has claimed the gold medal at the freeski halfpipe finals here in Beijing. Porteous is the first New Zealand male to win a Winter Olympic gold medal and the second Olympic medal of his career.

“Conditions were tough today, so I stuck to what I know, just really tried my best and left everything out there. I am in a bit of disbelief to be honest.”

Porteous came out of the gate swinging, lacing together his right and left double cork 1620s to take the top run 1 score of 93.00.

“The 1620s are something I have done for a while now; I have worked on those tricks for the last two years so they’re quite natural to me. I was just really focussing on doing them as smooth as possible.”

This score proved to be untouchable for the remainder of the event, with Porteous holding the top position and landing himself on top of the podium.

He was joined by David Wise and Alex Ferreira of the USA in second and third place respectively.  Porteous, Wise and Ferreira were also the three athletes atop the podium at the PyeongChang 2018 Winter Olympic Games four years ago, albeit in a different order.

“Watching Zoi win last week was really, really motivating because I wanted to be there, and I wanted to do that. It was really inspirational and driving for me and made me put my head down and do everything I could for this moment.”

Porteous’ brother Miguel was also competing today and finished in 11th place, landing one of his runs but with a couple of bobbles.

“I really went for it today, it wasn’t my plan to do a safe run, I wanted to give it everything I had.” 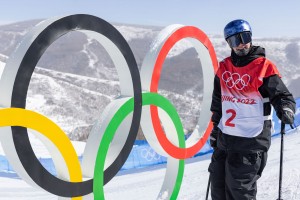