Nico Porteous has once again proven why he is the one to beat by taking the win at the Mammoth Mountain freeski halfpipe World Cup with an incredible score of 97.00 out of 100.

After a bobble on his right double 1620 landing in run one had him sitting in 8th position, the pressure was on for run two. Nico was the only athlete who could upset the all American podium at this point in the event.

He put the pedal down and showed us why he is one of the best in the world, lacing together back to back double 1620’s, the biggest trick of the day performed not once, but twice in his run and was rewarded with massive score of 97.00.

“It was pretty tough, the last few competitions I haven’t skied at my best so the bobble in run one was a bit frustrating to be honest. I spoke with my coach Tommy at the bottom and we decided it was all or nothing so should attempt that run again and just do my best”.

Today was the final Freeski Halfpipe World Cup before Nico heads to the Beijing 2022 Olympic Winter Games. “It gives me a lot of confidence going into Beijing, I was concerned that I wasn’t quite where I thought I was, so to get the win today is really epic”.

It has been an action packed morning with four Kiwi freeski halfpipe athletes all competing in the Mammoth Mountain World Cup finals.

16 year old Wānaka freeskier Gustav Legnavsky has also achieved a career best result this morning, finishing in 8th place in his first ever World Cup final. Gustav showed everyone why he belongs in the finals when he came out swinging in his first run with a switch left double 1080 and a huge left double 1260.

Gustav explained “I was really nervous at the top of my first run because not only was it my first run in my first finals, it was also a new and technical run I had never landed in competition before. Once I got to the bottom I was relieved because I landed the run and I was stoked to have shown everyone what I can do”

Conditions have been challenging in Mammoth during this first few days of this World Cup with high winds resulting in postponements throughout the programme. At the riders vote last night the athletes made the decision to postpone the finals to this morning and they were greeted with blue skies and no wind. 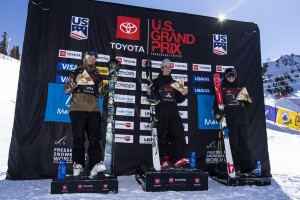