Adam Zampa of Slovakia pulled out all the stops to win gold at the Audi quattro Winter Games NZ 2015 FIS Alpine Skiing Australia New Zealand Cup (ANC) giant slalom at Coronet Peak near Queenstown today, successfully defending his 2013 title and winning his second gold medal at this year’s Games. First New Zealander was national representative Nick Prebble of Christchurch whose creditable performance put him in tenth place in 1.48.99. He also took out the Pieter Small-Smith trophy for the fastest New Zealand man in the field.

Zampa, who won the ANC slalom gold medal yesterday at the same venue, was upbeat about winning yet another Winter Games NZ title.

“I went into the second run feeling very good at the top of the course. I stayed high round the gates and it is a really good feeling to finish in first place. Hopefully I can come back in two years and defend my titles again.”

An elite field of 84 men and 50 women, many ranked in the top 100 in the world and representing 19 countries, started in the race held on the Davies GS course in the Rocky Gully Race Arena. Thirty six women and 46 men completed the two run giant slalom.

The men’s first run had all the hallmarks of the 2013 event after popular Slovakian brothers, Adam and Andreas Zampa, finished in first and third respectively. Andreas, who won the Winter Games NZ 2013 bronze medal, held on tight in the second run, but was eventually edged out into fourth place.

In the women’s race Austrian Chiara Mair, ranked 59th in the world, had the fastest first run of 54.44 and was seventh in the second run in 54.15, scoring 1.48.59 which was enough to give her the gold medal.

Mair who raced at Coronet Peak in the annual FIS races last year was happy to head off the strong field of Austrians and Norwegians.

“The slope was very good, the second run was slow and I had to fight a lot but I like that,” she said.

Norway’s Lotte Smiseth Sejersted who had the sixth fastest first run time of 55.38 put down the hammer in the second to clock the fastest time of 53.67 and take the silver medal in 1.49.05. She was just splits ahead of the joint bronze medallists, Kristine Fausa Aasberg of Norway and Stephanie Brunner of Austria, who recorded combined times of 1.49.21.

Aasberg is ranked 51 in the world and was lying second after the first run while Brunner, world number 48, came from fifth position to share the overall third placing.

Chairman of the FIS Australia New Zealand Committee David Howden was pleased with the outcome of the international standard event.

“The course was quite challenging in parts particularly on the steep section and the rolls. It was a top quality field and very competitive amongst the leaders. It is great to see the calibre of athletes who have turned up for the Audio quattro Winter Games NZ ANC races this year and it bodes well for the 2017 event ahead of the Winter Olympics in 2018.” 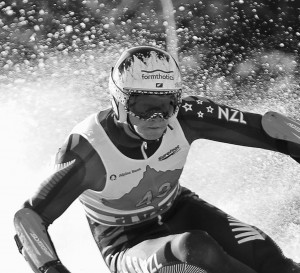