Fifteen-year-old freeski halfpipe athlete Nico Porteous is set to become New Zealand's youngest Winter Olympian next February as he joins his brother Miguel (18, freeski halfpipe) as one of the first athletes named to the New Zealand 2018 Olympic Winter Games Team.

An initial tranche of snowboard and freeski athletes were named at an informal ceremony on the shores of Lake Wanaka tdoay after they met both the Snow Sports NZ Nomination Criteria and the New Zealand Olympic Committee's tough 'top 16' selection standard early in the season.

Further PyeongChang 2018 nominations and selections will take place between November and January and are expected to include additional freeski and snowboard athletes as well as athletes who continue to track well from speedskating, skeleton and alpine ski.

The selection announcement ceremony also included the hand over of Te Mahutonga, the Olympic team's kakahu (cloak) from the Rio 2016 Olympic Team to the PyeongChang 2018 team.

NZOC CEO Kereyn Smith says she is delighted to be formally underway with building a team for the PyeongChang 2018 Olympic Winter Games.

“With just over 100 days to go, we are very pleased to welcome the first athletes to the New Zealand Olympic Winter Team," she said. "These athletes compete in Olympic winter sports which require incredible physical and mental strength and they have undoubtedly earned the right to wear the fern at the Olympic Winter Games."

"The handing over of Te Mahutonga, our team cloak was a special moment, too, reminding us of the pride and honour with which our athletes represent New Zealand."

She added that with seven of the nine athletes named today being 20 years old or younger, the selection announcement demonstrates the depth of young talent currently within New Zealand snow sports.

“It’s a huge achievement for the athletes selected today. The freeski and snowboard disciplines are incredibly challenging and these athletes take huge risks every time they compete. I warmly welcome them to the team and look forward to supporting them as they wear the silver fern at the Olympic Winter Games next February."

"We also wish those athletes continuing to work towards being nominated and selected for PyeongChang 2018 all the best at their upcoming events," he said.

"The ski and snowboard athletes named today are tracking well to deliver strong performances at PyeongChang 2018. It really does take an elite snow sports athlete to be able take on the Olympic features in the 22 metre half pipe, on the 30 metre plus high jumps, on the slopestyle course and race on the technically difficult ski cross course.

"The tricks and technical skiing the athletes selected today have demonstrated rate amongst the best in the world.

"As a programme, we have been focused on qualifying athletes early in the qualification window, to enable a complete focus on preparation for the Olympic features and race tracks, we are delighted the first group of athletes have now been confirmed to the team, with more nominations and selections expected."

The athletes themselves are pleased to have been confirmed early to the team. Nico Porteous, who will be 16 years and 78 days on the first day of the games, says he's ready to take on the halfpipe at PyeongChang 2018.

“It's been a big dream of mine to represent my country at the Olympic Winter Games, there's been lots of build up so for it be finally happening is very cool. It's going to be pretty awesome to get to compete alongside my brother as well,” he said.

"Everything's going really well, I've has a successful training period at spring camp, I've been training well and getting all my tricks so I'm ready to go."

"I'm feeling really good, I'm working on putting together my runs and getting them really solid. I've got some good training camps and competitions coming up so it's time to throw down," she said.

The athletes named today, along with those still working towards nomination and selection, will now head to the Northern Hemisphere for the pre-Olympic winter season.

A team of around 20 New Zealand athletes is expected to compete at the games. 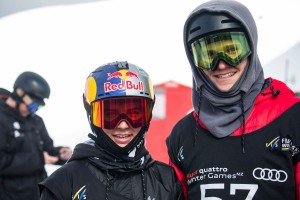