New Zealand Olympic Committee CEO Kereyn Smith says the team is exciting. “New Zealand has had some strong results in the adrenaline-filled freeski and snowboard disciplines and we’re delighted that our athletes will be at Sochi 2014 competing in cutting edge Olympic sports,” she said.

“We also welcome back athletes competing in ice speed skating and skeleton where selection criteria have been tougher than in previous years.”

Smith added that strengthened selection criteria ensured that athletes selected for New Zealand had proven themselves with a track record of credible performances leading into the Olympic Winter Games, seeing them largely achieve top half of the field finishes over the qualifying period.

“I’m really proud to have been named to the Olympic team and to have the opportunity to represent New Zealand in Sochi. With my sport being part of the Winter Olympics for the first time ever I’m even more stoked to be going,” Wells said.

Bex Sinclair is the only park-and-pipe athlete that has been to the Olympic Winter Games before and has made an encouraging comeback from serious injury, now sitting 12th on international rankings and second on the World Cup circuit.

Her previous Olympic experience will help her provide a steadying hand in the pressure-filled Olympic environment.

Head coach of the Olympic park and pipe snow sports team Tom Willmott says blood, sweat and tears have gone into Olympic preparation for his athletes. “It’s been four long years and we’re looking to maintain the recent strong momentum heading into the Olympic Games and deliver the results that the team is capable of,” he said.

"The recent momentum gained at the final qualifying events has given the team a boost and we will travel to Sochi with pride and confidence, ready to perform on the world’s biggest sporting stage.”

Skeleton racer Ben Sandford who suffered a bone-jarring crash ahead of his final Olympic qualification event was also delighted to be heading back to the Olympic Winter Games.

He’ll be joined in skeleton by first time Olympic athlete Katharine Eustace who finished her qualification season with strong performances, resulting in a World Ranking of 11th heading into the games.

21 year-old alpine skier Adam Barwood was also selected to the team after solid results over the 2013/14 season met the strengthened selection criteria.

In Sochi, Russia, New Zealand Olympic Committee Chef de Mission Pete Wardell says he’s delighted the team has been named and is looking forward to welcoming them into the New Zealand villages from 30 January and ensuring they have the resources they need to achieve on the world’s stage.

The New Zealand Olympic Team to Sochi 2014 is: 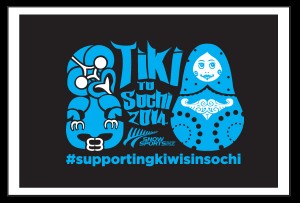