Adam Barwood and Willis Feasey got their first day’s racing under their belts today, competing in the Super-G at Joengseon Alpine Centre. While not a preferred event for either racer, they were positive about their first Olympic competition of the 2018 Games with Willis finishing 37th and Adam 43rd.

Adam had an early mistake which cost him his speed and valuable seconds near the top of the course, getting thrown almost horizontal and touching the snow with his hip before bouncing back up. He managed to recover some pace through the mid-section but then gave spectators a nervous few seconds when he misjudged the final jump and flailed through the air before finding his feet and crossing the finish line.

“I saved it coming off the last jump,” he explains. “It was a little bit close. I wasn’t in quite the right position when I left the jump so once you’re in the air it's harder to get back.”

Willis was generally pleased with his first day's racing, despite a few mistakes in his run.

“I had some really good sections so I’m happy with that skiing,” he said. “I made a mistake coming off one of the jumps, I went too straight over the roll and landed a bit deeper than I was hoping.

“I think I can take a lot of positives away from today. I was skiing pretty well in most of the sections so I’m excited for the GS.”

Alice Robinson recorded a DNF in the women’s Slalom. Starting near the back of the field in bib 59 she struggled with the rutted course and skied out of the course. 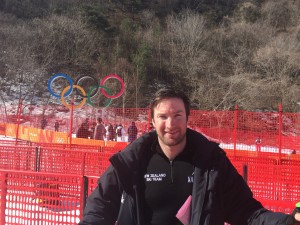