Sochi, Russia- (9 February 2014) – Three New Zealand snowboarders were amongst the 12 riders contesting the semi-final rounds of the women’s snowboard slopestyle at the Rosa Khutor Extreme Park in Sochi today (Sunday).

With eight competitors having previously qualified directly to finals, the semi-final would determine the final four riders. The 12 finalists would then look to impress judges with well executed, technical runs with the top three riders earning Olympic medals for the first time in the sport of snowboard slopestyle.

While New Zealand’s ‘Awesome Foursome’ of Christy Prior, Stefi Luxton, Rebecca ‘Possum’ Torr and Shelly Gotlieb missed out on direct qualification to finals earlier in the week, they said that the qualifying rounds had been a good opportunity to test out the course, rid themselves of opening night nerves and settle into competition mode ahead of today’s semi-finals.

For Christy Prior, the semi-final strategy had been clear: go bigger. Determined to demonstrate her technical ability on the larger jumps Christy was looking strong and confident in practice runs before a nasty crash and knock to the head led to the difficult decision to withdraw from competition.

Shelly Gotlieb, the most experienced of the Kiwi contingent, was one of the first riders to drop in to the course today. Having crashed both qualification runs earlier in the week whilst attempting the more technical 900 rotation compared to a maximum 720 attempted by any other competitor, the question to ask was whether she would play it safe in semi-finals or try to prove that Kiwis can fly.

Looking controlled and determined Shelly put down a convincing first run including cab 5 and backside 3 tricks to score 63.25 putting her in sixth place at the end of the first of her two runs.

“I really just wanted to land a good clean run. The judges were rewarding for grabs and how big you were going on the jumps so I really tried to focus on that, “ explained Shelly.

Still determined to push for a top score on her final attempt, Shelly’s second run was clean on the top rail section.  Going for the backside 720 on the second jump she crashed out with a little too much spin and was unable to improve on her first run score.

Next Kiwi to compete, Stefi Luxton, looked poised through the rail section and almost landed a frontside 360 but her brief sit down on landing meant a score of 18.25 for the first run. Pushing harder and higher on the second run Stefi was able to put together what her coach Tom Willmott described as “a personal stand out performance of the day” and was rewarded with a high score of 60.25.

“To get there when the pressure was on, right on the very last run of semi-finals was great,” continued Tom Willmott.

Her performance was all the more impressive given that Stefi had broken her snowboard in the previous day’s training and was breaking in a brand new board for today’s competition.

Rebecca Possum Torr was “ready to get the job done” after qualifying in sixth place on Thursday ahead of her NZ team mates. A few wobbles on the rails and clipping the knuckle of the second jump Possum posted a score of 27.25 and gave herself the thumbs down for the first run. Still gunning for the coveted finals spot she opted to go big in the second run but a mistake on the first jump meant she only improved her score slightly to 32.5.

Speaking after the competition, Head Coach Tom Willmott explained that while there was some “disappointment that the team’s bid to get people into the finals and challenge for the podium didn’t quite go to plan” and that Christy Prior not able to compete had been “a bit of a blow to the team” he was “extremely proud how the girls picked themselves up and stayed focused on their own individual mission.”

Winter Performance Programme Director Ashley Light expressed similar sentiments, saying that despite the “unfortunate start to the event, the girls all put down the best runs they could in the circumstances.”

Ashley Light described the semi final results as in line with expectation saying that the New Zealand athletes had “delivered what we thought they were capable of.”

“Going into competition ranked where they were, all of them apart from Christy Prior were ranked outside the top 10.” 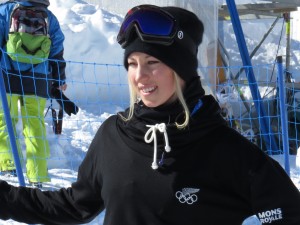