Lake Wanaka, New Zealand (6 October 2017) – The final day of competition in the 2017 Snow Sports NZ Junior Ski and Snowboard National Championships wrapped up at Cardrona Alpine Resort near Wanaka today with the Smith Skier-Cross and Salomon Snowboard Freeride. The last chance to secure overall national titles, the young athletes – aged between five and 18 years – went all out for top scores and fastest times.

The Smith Skier-Cross saw some exciting head to head racing on the Speed Zone Gravity-cross track. Racers first completed a single time trial before the fastest racers in each age category moved through to elimination rounds, racing four at a time.

A hybrid of ski racing and freeski, the skier-cross discipline suits a range of competitors and this was reflected on today’s podiums. Park and pipe specialists Ben Harrington and Maggie Little were the respective winners of the Senior Girls’ and Boys’ categories while ski racer Amy Benson took the win in the Primary Girls’ category.

The snowboarders had one run through the Tulips course to impress the judges with a combination of well-controlled, fluid riding, air & style, and strong technique. Extremely firm conditions first thing in the morning led to a delayed start to allow the snow to soften and even with a midday start the call was made for all age categories to start from midway down the course.

Meila Stalker (Queenstown) was the very first rider out of the gates and topped the Intermediate Girls’ category with strong, fast riding top to bottom of the course and a big method grab midway down. Cool Wakushima (Queenstown), a long-time Junior Nationals competitor, looked very much at home on the course and had one of the most impressive runs of the female competitors. She won the Junior Girls’ category, attacking the course with strong fast turns before lining up two big drops with big grabs.

Zak Baikie - another seasoned Junior Nationals competitor – risked a last-minute change to his run in a bid to make the top step of the podium, throwing a huge wildcat (backflip) off one of the rock features. “I saw one of the other competitors do a 360 so I knew I had to step it up,” he explained. “This has definitely been my best year so far, I’m really happy with how my riding has been progressing.”

Senior Boys competitor Niklas Meindl sent the biggest drop of the day, going twice the size of any other competitor with a very tight landing in a no fall zone run out, and finished his day with a gold medal. 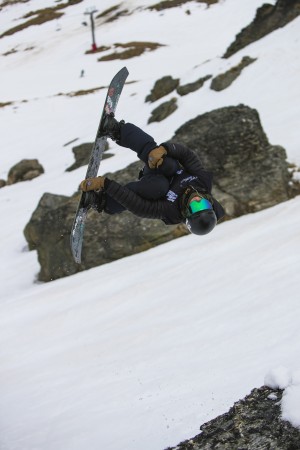