Bokwang Phoenix Park, Korea (18 February 2016) - The Korean World Cup Snowboard and Freeski Slopestyle competition currently in action at the 2018 Winter Olympic venue of Phoenix Park close to the host city of PyeongChang is being used as a test two years out from the big one, both by the event organisers and the various national teams in attendance.  On an exciting, new and challenging course offering a multitude of different options, Jossi Wells was in his element in training playing with different lines and composing a great qualifying run.

Dropping in with his trademark flair, navigating the top three rail sections with aplomb, run one of qualifying was going extremely well until a tail-wind gave Jossi some extra air-time.  Going big on the first jump, reigning it in on the second, but overshooting jump three, Jossi crashed hard at the very bottom of the landing and suffered a good winding.  Hobbling through the finish area in obvious pain, he had the support team concerned for his wellbeing and ability to get back into action for run two.

With nerves of steel, Jossi held it together, and on one of the last runs of the qualifying day, pulled off an outstanding second run, to march into the finals with a score of 89.6 – the fifth highest score of the day, despite a hand-drag on jump two.  The judges were obviously impressed with his creative rail-line and well executed jump combo linking a right double 1080 to left double 1260 to switch left double 1080 together for the first time in competition.

Team mates Alec Savery and Anna Willox both did a great job in training but did not land either of their runs in the contest.

Today it is the snowboarders' turn to test the place out in their qualifying heats with Carlos Garcia-Knight and Christy Prior in action for NZL, both enjoying the exciting course in training. 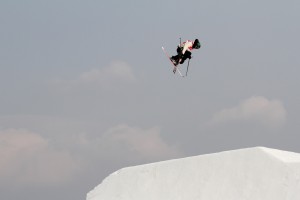