Tignes, France (20 March 2013) – It’s been a tough season for freeskier Jossi Wells but today’s slopestyle competition at X Games Tignes signalled he’s still got what it takes to come out on top.

Not originally scheduled to compete in the slopestyle event, Wells received a last-minute invite after Norway's Andreas Hatveit pulled out of the competition on Wednesday with a minor neck injury.

On-going injury problems, which cause almost constant pain in his ankles and knees, have meant that Wells has been unable to ski to his full potential, and results-wise he has spent much of the northern hemisphere season flying under the radar.

With the season’s focus on qualifying for the 2014 Winter Olympic Games – a goal which he has achieved – Wells had almost resigned himself to a season spent mostly off the podium and away from the limelight. With the pressure off, Wells could afford to relax and that, it would appear, was the secret to today’s success.

“Jossi has achieved his major goal of the season which was to qualify for the Olympics so when he came in to today’s competition he was relaxed and did not have high expectations on himself,” shares coach and father Bruce. “The ideal performance state for Jossi is relaxed and having fun. He knows he can’t ski to his full ability yet (whilst recovery from injury), has come to terms with that and hey presto he did ski to his full ability!”

Jossi Wells is, naturally, pretty pleased with his result. No need for words, the body language said it all. “He had a huge grin on his face,” says Bruce, ”in fact not just his face, it was coming off his whole body.”

Tignes has seen stormy weather all week, with poor visibility and increasing snowfall affecting the course's speed. As weather conditions deteriorated, those skiers who had not put down high-scoring runs on their first attempt found their chances of qualification slipping away from them. Three of the top medal contenders including X Games Aspen 2013 podium finishers Nick Goepper, Henrik Harlaut, and James Woods failed to qualify for the final round at X Games Tignes.

Jossi Wells will also compete in the halfpipe competition and has a busy day ahead of him tomorrow with slopestyle finals followed by halfpipe qualifications in the evening. 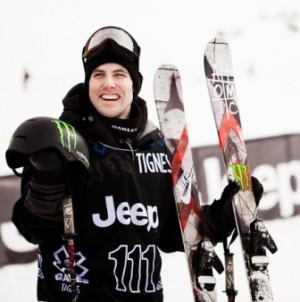