The Dew Tour has seen strong results all round from the Cardrona NZ Park & Pipe team. Janina Kuzma finished fourth in women's superpipe and Beau-James Wells (Wanaka) achieved a career-best result finishing second in men's superpipe. Byron Wells, who has been off snow recovering from injury since April this year, finished in fifth place in the superpipe.

Competitors woke to clear skies and no wind, ideal conditions for the Dew Tour freeski Toyota slope style finals. The course was in perfect condition for the heavily stacked 12-strong field. After qualifying in second place 2 days earlier Jossi was feeling well rested, relaxed and confident. Jossi took a strategic approach, on his first run smoothly landing the exact run he had qualified with, knowing he had additional tricks to add to his final run.

“My goal was to look as good as possible and after the first run, placed in 6th, I knew I had to put down the switch 14, a trick I had only ever completed in a big air comp, not slopestyle. I had been working hard on this in training and at the Cardrona Spring Camp in October. I put down all 4 doubles and aimed to tackle the last jump when I got to it and with such a heavy finals, I knew it had to look really good”.

"This was the heaviest final I have ever competed in. The level of skiing was amazing with all the competitors putting down podium level runs. I am so stoked with the result and I feel set up for the rest of the season and my next comp in a months time.”

Coach Bruce Wells says, “the caliber of the field would have made this particularly difficult for the judges. The run Jossi put down we had planned in training and we knew being able to link together the variety of tricks in his toolbox would be key. We are frothing, it has been an amazing weekend.” 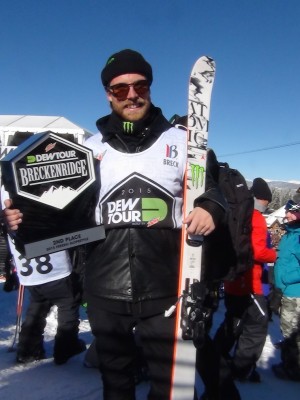