Jess Hotter (Ohakune, 28) has taken the win at the first final of the 2022 Freeride World Tour, held in Fieberbrunn, Austria. Today’s win means Hotter has put more points on the board to grow her lead in the overall rankings by almost 7000 points.

As the second-to-last event of the season, the pressure was higher than ever as the riders fought to lock in results in the race for the world title.

“I took a really heavy crash on my second run, but luckily my first run was good enough to win the event. I’m stoked for the win, but I still have unfinished business on the Wildseeloder and am already looking forward to coming back next year.” – Jess Hotter.

Hotter was the second athlete of the day to drop into the venue. The two-run format required a very early start, and the snow was a challenging mix of sugar and ice during the early hours of the day. But that didn’t cause Hotter to hold back, as she delivered an incredible first run with huge drops and technical skiing.

Hotter skied out of the start gate into the heavily exposed area and stomped a couple of solid airs that she approached with speed before heading over to the shaded part of the venue to finish off with some playful drops and high-speed turns. The judges liked what they saw and rewarded her with an 88.67, putting her in the top spot.

Despite being in the top spot Hotter flew out of the gate into her second run, looking to better her score. A backseat landing off a big cliff resulted in a heavy fall, with Jess launching head over heels down the steep face. She was quick to get up and wave to the camera, showing them that she was OK.

Hotter’s first run score remained the top score in the women’s ski category and she took the win, her third podium of the 2022 Freeride World Tour, putting her in a fantastic position before the finals in Verbier in two weeks’ time.

Hedvig Wessel (NOR) finished in second place and in third was 2021 World Champion Elisabeth Gerritzen (SUI).

Finn Bilous, Beijing 2022 Big Air and Slopestyle athlete was invited to Fieberbrunn as a Wildcard onto the prestigious Freeride World Tour. A hip check on run one meant he needed to go all out in run two. He put down a stylish run, including a huge cork 720 off the wind lip, finishing in 6th place.

The third Kiwi competing, Jamesa Hampton, took a heavy crash in run one resulting in him being unable to drop into his second run. 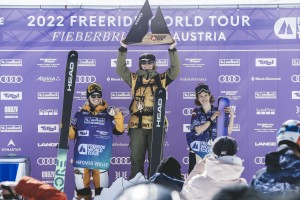