Park City is the final stop on the three-stop tour which has attracted a field of top ranked international freeskiers.The freeskiing events at Park City are sanctioned as World Cups by the International Ski Federation (FIS) and Platinum level events by the Association of Freeskiing Professionals (AFP). Janina Kuzma won the first tour stop in Copper Mountain and placed second at Mammoth Mountain ahead of today’s third place in Park City.

Janina Kuzma would save her best for last, finishing her third run with a score of 74.40. Initially sitting in second place at the end of round one but still needing to up the ante as her fellow contestants also began upping their scores, the Kiwi improved her score with each of her three runs.

“My first run was my safety run,” explains Janina. “It was a good run but my amplitude wasn't quite there.”

The second run was bigger and better but still not enough to nail down the podium spot and with one run left to go everything was on the line.

“It was quite nerve racking not having two solid first runs,” explains Janina. “Normally I don't like the three run finals format but I really needed it today.”

With snow starting to fall and threatening to slow the pace, Janina had to work hard to maintain her speed and gain the amplitude she needed for the more technical tricks. Her determination paid off and she was able to produce a solid combination of tricks for a score of 74.40 and a spot on the podium.

“I was so happy when I saw my score come through on my third run and knew I was in for the overall title.”

Janina will now face off against today's winner Ayana Onozuka for the World Cup globe in Tignes.

Snowboarder Christy Prior finished fifth in yesterday’s women’s snowboard slopestyle finals. Her day seemed doomed from the start when she made an uncharacteristic mistake on the rail features on her first run. She landed her second run despite a mistake on one of the jumps but took a big hit on the third and final run, over rotating the jump and landing heavily on her shoulder.

Jossi Wells (Wanaka) finished seventh in qualifying rounds for the men’s freeski slopestyle on Thursday, missing out on a spot in the finals. Penalised for a missed grab in an otherwise exceptional run, his high score of 81.80 fell short of near-perfect standards set by US skiers Joss Christensen (95.00) and Gus Kenworthy (93.40).

“Janina’s result today is a very positive end to the team’s pinnacle event,” he says. “Janina and Christy continued to show good form, both qualifying for finals and we’re excited to see some of our development level riders – Miguel Porteous (Christchurch) and Jackson Wells (Wanaka)- demonstrating good potential.” 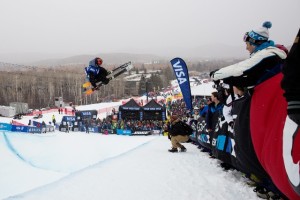