Jackson Wells Through to Finals at World Cup in Stubai

Stubai, (AUT) - The FIS Freeski slopestyle World Cup was back to business this weekend at the infamous Stubai Zoo snowpark in Tirol. Jackson Wells qualified fourth in his heat to make the cut to the 16-man final while Finn Bilous' fifth place qualifying result saw him miss out on finals by less than one point. Wells finished 12th in finals.

As many athletes struggled to land their runs, Norway's Oystein Braaten took an early lead with 88.00 points, improving his score to 91.40 on his second attempt to finish with gold in his hand. Second place went to Evan McEachran (CAN), who threw down one of the most technical runs of the day,  followed up by Colby Stevenson (USA) in third place.

In the ladies’ competition it was the 15-year-old Jennie-Lee Burmansson (SWE) who dominated the field. Katie Summerhayes (GBR) finished the day in second place and Caroline Claire (USA) third. NZ's Margaux Hackett and Gia Hughes finished 22nd and 26th respectively. 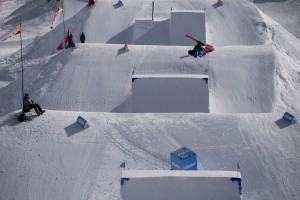