Racing commenced on Thursday 9th August with a classic technique race of 15Km for the men and 10km for the women.  The men's race was a tight peloton until the last lap when the Polish National team member Maciej Kreczmer broke away from the pack and led the two Japanese skiers, Nobu Narase and Kimura Masaya, into 2nd and 3rd place.  In the ladies race Justina Kowalczyk World No 1 from Poland raced off and arrived at the finish line 3 minutes before the Japanese ladies.

The men's Russian sprint team took all the places in the final after the Japanese skier Nobu Narase had won the time trial that is used to allocate places in the heats.  Nobu went onto win his heat but lost his semi final to the Russians after a very high-speed race where he was just beaten on the finish line.  The Russians have major World Cup sprint wins in their CV's and were shocked into action after losing the time trial.

The women's sprint also had excitement when World No1 Justina Kowalczyk from Poland fell in the first 100 metres but recovered and had to make up a 50-metre deficit on her Japanese competition, Naoko Omuri followed by Sumiko Ishigashi.  It took Justina most of the course to regain her lead and win the event.

The last event for women was the 5Km freestyle and again Justina showed her class against the highly ranked Russian Julia Tikhonova who was second and Anastasia Kuzmina from Slovakia, a gold medallist from Biathlon at the Vancouver Olympics.  There was .06 of a second separating second and third place.  The timing system was just able to differentiate the tiny margin.

In the 10Km men’s race Maciej Kreczmer was again the winner showing Polish dominance in the endurance events.  Kreczmer was followed home by Nobu Narase and Kimura Masaya.

Colette Borgonse of Canada and her compatriot Chris Klebl dominated the paralympian sitski events.  In the standing class the Japanese ladies were supreme and the small Korean team were very competitive.  The paralympians bring an inspirational element to the competition and form an essential part of the Snow Farm race programme.

The TransTasman rivalry took place further back in the field with Callum Watson from Australia and current ANCup leader beating Andy Pohl from Otago University in the classic race but Andy reversing the situation in the freestyle.

The Snow Farm is very privileged to have racing of this standard as so many top International teams use the venue for off-season training. There was great spectator support for the last race day as it coincided with the very popular Snow Farm "Locals" day. 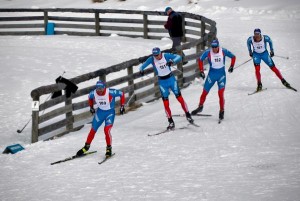