Landgraaf, The Netherlands (24 November 2012) - The Kiwis were once again triumphant on the second day of racing at the IPCAS race hosted by indoor snow centre SnowWorld in Landgraaf in the Netherlands on 23rd November. New Zealand adaptive snowboarder Carl Murphy (Wanaka) claimed his second gold medal of the competition in the Lower Limb Impaired category with Byron Raubenheimer (Auckland) bringing home the bronze.

As the first qualifying event for the Paralympic Games in Sochi in 2014, the race has attracted competitors from around the world.  Snow Sports NZ’s Adam Dooney, who coaches Carl Murphy, is delighted by the results from the two-day competition and confident that both riders will continue to post strong results as the northern hemisphere season progresses.

“Seeing two New Zealanders on the podium is always a good day!” says Dooney. “Carl had an awesome day, posting three clean runs all of which were the fastest times of the day with his third run being the fastest time over both days of racing.

“This was the first time Byron has been on the podium at an international para snowboard event but it will definitely not be his last.”

Carl Murphy is, quite rightly, proud of his performance in the first event of the season, attributing his success to “all the hard work in the gym and training with my coach Adam Dooney.”

“After the second day of racing I am so happy I backed up my results from yesterday. Not only by winning the gold but by how well I rode today and how focused I was on topping the podium.  All three of my runs were clean and fast, posting the three quickest times of the day and my last run was the fastest of the whole two day event.”

Murphy was also quick to congratulate fellow Kiwi Byron Raubenheimer who claimed his first podium at a para-snowboard event in today’s racing.

“He has worked extremely hard over the past year to get where he is and it’s great to see him get a podium result for his work,” said Murphy.

While pleased with their opening results both riders are conscious that the season has only just begun and that the road to the ultimate goal of Paralympic qualification will be a challenging one.

“I still have a lot of work to do on my riding and race consistency,” says Raubenheimer. “But a podium finish and second fastest time of the event is definitely a positive way to start my road to Sochi.”

Says Murphy, “It is still early in the season but my goals are for these type of results to continue into 2013 and 2014.”

The Kiwis will now travel back to their northern hemisphere base in Colorado for more training in preparation for the Paralympic test event in Sochi, Russia in early 2013. 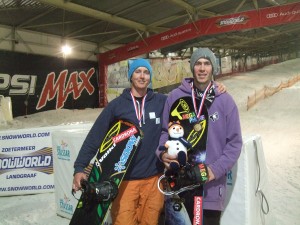