Seiser Alm, Italy (25 January 2017) – The Cardrona NZ Park and Pipe team has chalked up another successful round of World Cup qualifying results with the freeskiers in action on the Slopestyle course at the Italian resort of Seiser Alm on Thursday. Jackson Wells (Wanaka) finished fourth in his heat, earning him the direct route to finals, while fifth-place finisher Finn Bilous (Wanaka) will move through to semi-finals.

The field of 75 male competitors was broken down into three heats with a best-of-two runs qualifications format. The top four place-getters from each heat earned finals spots while the next four qualified for semi-finals.

"I was second to drop so I had a freshly groomed course to work with," explains Jackson.  "I landed all my tricks exactly how I wanted to, except on the last jump I just missed my grab. I guess the judges liked everything else in the run so they still gave me a pretty good score. I was in fourth for a very long time just waiting to hear if anyone would score higher and push me back. Before I knew it all the riders had been and I was still in fourth. It was an incredible end to the day, and now I'm even more hungry to do a lot better in the finals."

While some of the top athletes in the World Cup standings are missing out on Seiser Alm due to X Games invitations, with well-established players like Russ Henshaw (AUS), Oscar Wester (SWE) and Jonas Hunziker (SUI) still in the mix, competition remains fierce.

Freeski slopestyle semi-finals and finals are scheduled for Saturday (28 January).

New Zealander Tiarn Collins has qualified for the snowboard slopestyle semi-finals which will take place on Friday (27 January). 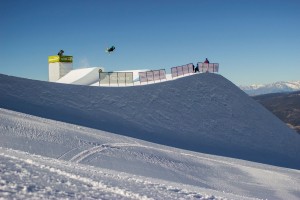