Robinson was quick out of the start gate for run one, posting a significant advantage on her first two splits but lost some speed through the middle section, finishing in 6th place in her first run, +0.51 seconds behind run one leader Mikaela Shiffrin (USA).

Robinson was excited for run two and came out of the gate, attacking the course from the first gate. She maintained her pace throughout the whole run and was sitting in the top spot with just five athletes to go.

“Obviously it hasn’t been an easy season for me and I wanted to give it my all today, and I really tried my best. Sometimes when you’re pushing it, you make some mistakes, and that’s kind of what I had on the second run, but I’m pretty proud of getting out there and full attacking as much as I could. I lost quite a bit of time down the bottom. I still have a lot of room to get better.” Robinson explained at the Cortina Press Conference.

Fellow Kiwi Piera Hudson (Hawkes Bay) also competed in the Giant Slalom overnight. Hudson was looking strong out of the start gate with some very respectable splits but unfortunately came unstuck just gates from the finish and received a DNF.

Up next for the Kiwi team at the Alpine World Championships is the men’s Giant Slalom tonight (Friday) at 10pm NZT with Willis Feasey in the start gate. 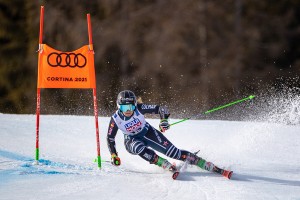