Font Romeu (FRA) - For the second day in a row the weather was the major player at the first slopestyle World Cup of the season in Font Romeu. In the abbreviated competition it was Tess Ledeux (FRA) and McRae Williams (USA) to be awarded with the wins at the end of the day.

After the ladies' qualifications were called off yesterday due to the bad weather conditions, Saturday unfortunately brought little to no improvement in the situation. Following what was sort of stop-and-go marathon the ladies were only able to complete one qualification run today. As it often happens in the mountains, the Mother Nature had different plans from those of the organizers and athletes and as the storm begun to gain on its intensity, the course got covered with dense clouds accompanied by strong winds and heavy snowfalls.

Given the priority to athletes' safety, after several delays and postponements of the program, the jury decided to call it a day and cancel the finals. With no more possibilities to run the show, the qualifications results were taken to stand as the final rankings. NZ's Jossi Wells therefore finished in 10th place.

In the ladies' competition it was 15 years-old Tess Ledeux who was able to step it up in the challenging conditions and score her first-ever World Cup win. By gaining 100 points in the overall standing, Ledeux was also awarded with the yellow World Cup leader bib, what surely made this day a special one for the young French rider.

"It was a very hard day to compete, but I'm super happy to land my tricks and ending up on top of the podium," Ledeux said after the race, "Today's result motivates me to keep the hard work and further improve my skiing so I can win more competitions in the future".

The second place went to Johanne Killi from Norway with the Canadian skier Anouk Purnelle-Faniel rounding out the ladies' podium.

On the men's side top qualifier from Thursday's heat 1 McRae Williams ended up taking the first place with the score of 92.80. Similarly to Leduex, also Williams grabbed his first-ever World Cup victory at the slopestyle competition in Font Romeu.

Williams was joined on the podium by Sweden’s Jesper Tjader in second and Alex Bellemare of Canada in third.

The slopestyle World Cup continues at the end of the month in Seiser Alm (ITA). The qualifications are scheduled for Thursday, January 24, with the finals taking place on Saturday, January 26. 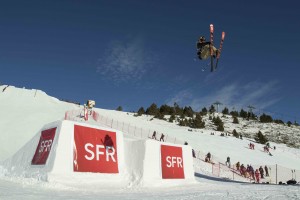