"I'm pretty happy with my result," says Willis. "My goal was to get top 30 and I was so close to that. I had a mistake on two of the turns which cost me a bit of time but I really can't complain.  The conditions were really tough: flat light, big jumps and a lot of terrain that was pretty difficult to navigate but the snow held up perfectly and it was so much fun to do!"

"I had some great skiing in the top half of the course but entered a turn offline lower down and lost all my speed," explains Adam.  "Still, it was a very fun track to compete on with five jumps built in. I'm looking forward to getting back there next week for the GS and Slalom."

Adam and Willis will now take a five-day break from competing and return to their base in Austria for training before heading back to St Moritz to compete in the Giant Slalom on Thursday 16 February.  Eliza Grigg and Piera Hudson will be in action on Monday 13 February for the ladies' GS qualification. 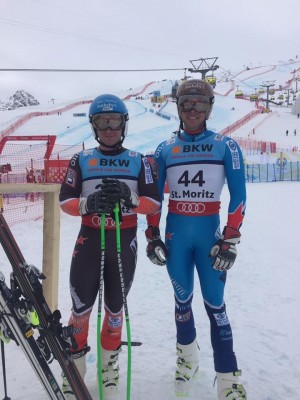