NZ freeskier Finn Bilous has achieved a career best result with a fifth-place finish at the Slopestyle World Cup in Seiser Alm, Italy on 16 March.

“Following on from the Olympics in February I felt I still had more gas in the tank for the competition season, so I decided to do a couple more events and try to bank some good results,” explains the 18-year-old Wanaka local who was disappointed to miss out on the Olympic finals in Pyeongchang by just one place.

“Going into this event I wanted to give it my all and try to land my best run possible, leaving it all on the hill,” he said.

Bilous stuck to his plan and emerged as the top qualifier in his heat on Wednesday 14 March.

“I My training went well and I felt good going in to qualifications. I had a few bobbles on my first run so looked to improve on my second run. I landed it all clean and got a 91.80 which I was super pumped about and that made me feel confident going in to finals.”

Bilous decided to use the same run for the 16-man final but struggled for speed on the jumps with fresh snow having fallen over night and warm temperatures adding to the challenge.

“I landed my first run well and scored an 88.40 placing me in second after run one. I went to change up my grabs on the second run, however, lacked speed in to the second jump, coming up short and crashing my second run.”

Bilous’ first run score was enough for fifth place, his best result at a World Cup and one to be proud of.

“All in all I was happy with how today went and how I skied,” he said. “This was the final World Cup of the season and my best World Cup result yet so I’m stoked.”

Andri Ragettli (SUI) wrapped up the season with the slopestyle crystal globe in hand after finishing top in the overall ranking. 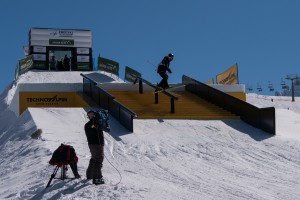