The result comes off the back off the silver-medal winning performance by NZ’s Zoi Sadowski Synnott (Wanaka) in the women’s snowboard slopestyle finals on Saturday. Carlos Garcia Knight (Christchurch) and Tiarn Collins (Queenstown) also achieved top-eight finishes in men’s slopestyle.

Duncan first had to finish within the top 48 fastest racers in qualifying rounds on Friday in order to make the cut for finals. He placed 41st, just squeezing in. In Sunday’s finals format, racers competed in heats of six, starting with the 1/8 finals before progressing through quarter finals, semi-finals and then a ‘small’ and ‘big’ final.

“For the first three heats I wasn’t having the best starts, but took a few inside lines to keep out of the chaos and managed to stay on my feet despite the soft and slushy snow to advance through to the next rounds,” explains Duncan.

“I fought my way to big finals where I had my best start of the day. In turn two I got a bit out of line and got pinched into the gate, losing a bit of speed but still managed to pull through. I am still beyond stoked with fifth at World Champs!”

France’s Pierre Vaultier snatched his career's first top-three result at the worlds. The reigning Olympic champion who had already underlined his claim on the title last Friday by posting the best time in the qualifiers kept the momentum of the time trials and rode as strong as ever.

In the end, he kept the lead from the start until the bottom of the course edging off local favourite Lucas Eguibar (ESP) as well as two-time world champion Alex Pullin (AUS) to the respective second and third rank. 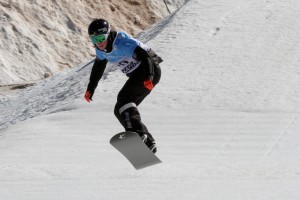