The youngest competitor and last of the 10 male skiers to drop, Murray wowed judges and spectators with a creative and technical line that featured two huge 360s.

“It was incredibly intimidating standing on top,” says Murray. “I was dropping last in Male Ski so I chose a run I thought wouldn’t get skied out. I did a 360 off the top then came in to a steep section in the left couloir, cut left and did another 360 off the main air.

“The whole thing was exhilarating but the highlight was getting to the bottom in one piece!”

Murray has made an unusually rapid rise to the elite ranks of competitive freeride, claiming the Junior World Tour title in 2016 before topping the rankings in the Freeride World Qualifier Tour in 2017 and earning one of 23 male ski spots on the main tour. A second place at the Vallnord-Arcalis, Andorra stop in March helped the Kiwi hold on to a top-12 tour ranking and therefore make the cut to the grand finale in Verbier.

Compatriot Sam Lee (Wanaka) finished in eighth place in Verbier, forced to err on the side of caution and pick his way down the top half of the face when the clouds closed in just as he pushed out of the start gate. The visibility cleared for the bottom half and “the ibex” was able to live up to his nickname, opening up with some big cliff drops, but not enough, by then, for a top score.

Murray and Lee finish the 2018 Freeride World Tour ranked ninth and 13th respectively, meaning that they have qualified places for the 2019 Tour.

Underlining the strength and depth of New Zealand freeride talent, Kiwis currently sit top of the rankings in three out of four categories on the Freeride World Qualifier Tour. Maria Kuzma has led women’s snowboard throughout the 2017/18 season and with three victories at four-star events, has already claimed her place on next year’s Freeride World Tour.

“I am super-stoked on my results for this year,” says the European based Kiwi, who successfully balances two careers as a competitive sportswoman and architect.

“My goal of course was to qualify for the FWT... but it feels so great to get enough points to qualify even before the last competition in Obergurgl.”

Wanaka-based athletes Anna Smoothy and Hank Bilous currently hold the top placings in women’s and men’s ski on the Qualifier Tour and will be chasing victory at the final competition at Obergurgl-Hochgurgl in Austria later this week (6-9 April) if they are to qualify for next year’s Freeride World Tour.

Meanwhile, junior athletes are ensuring that New Zealand will be well represented on the Freeride World Tour for years to come, with Manu Barnard (Wanaka) finishing second in Men’s Ski on the Freeride Junior Tour which was held in Verbier on the same day as the FWT final. Alistair Garland was close behind Barnard in fifth while Finn Duffy placed sixth in men’s snowboard. Duffy holds the top overall ranking for men’s snowboard on the Junior Tour while Garland is placed second and Barnard third in men’s ski. 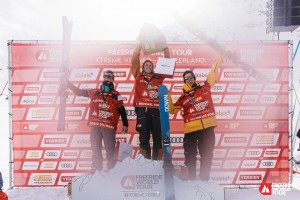