Winter Park, USA (3 January 2018) - The new year is off to a good start for New Zealand skier Corey Peters who has claimed two silver medals in Giant Slalom at the first World Para Alpine Skiing races of the season.

The races are being held over three days (2-4 January) in the US resort of Winter Park, Colorado, which the NZ Para alpine team uses as a training base for the northern hemisphere season. With limited snow at the resort, the Giant Slalom has had to be run on a shortened course.

Corey skied to second place on days one and two and says that he is "happy with the way things are tracking" with two months to go until the Paralympic Winter Games in PyeongChang.

"This season is about me peaking when it really counts and I feel things are coming together nicely."

Corey will be back in action again tomorrow for the final day of racing in Winter Park, alongside team mate Adam Hall. Race organisers hope to be able to run the Super-G on a full-length course and have been preparing the slopes with man-made snow. 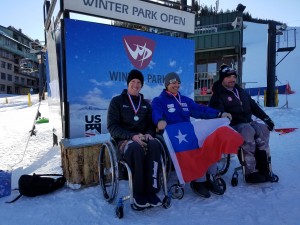