Three Kiwis featured amongst the field of 23 racers including NZ Paralympian Corey Peters (New Plymouth), who was looking for a better day at the office following a DNF in the IPCAS Southern Hemisphere Cup GS held yesterday as part of the Audi quattro Winter Games NZ.

Corey, ranked fourth in the world for this discipline, faced a strong challenge from world number two, Tyler Walker of the USA, who also posted a DNF result in yesterday’s race.

Cloud rolled in just as racing was due to start, reducing visibility on the Davies GS course at the Rocky Gully Arena.

The female racers were first to run with Korean skier Jae Rim Yang establishing the lead over Danelle Umstead of the USA in the visually impaired class. Melanie Schwarz (USA) was the sole racer in the women’s standing class and compatriot Laurie Stevens in the sitting class but both put together solid first runs.

17 year old Samuel Tate (Dunedin) who only took up ski racing in December 2014, was the first of the New Zealanders to take to the course, competing in the men’s standing category. Despite a “shaky” first run he made it safely through to the finish line to qualify for his second run.

Australian Paralympian Mitchell Gourley was forced to take a cautious approach to his first run after his goggle lens froze over midway down the course but a fast top section was enough for him to establish a clear lead over the men’s standing field after the first run.

Corey Peters took a determined approach to his first run. “I was disappointed with the way I skied yesterday and I came back today wanting to make amends,” he explains. He found the form he was looking for, leading the men’s sitting category after the first run in a time of 42.57s.  Tyler Walker took a more cautious approach and skied into second place in 42.98s.

“I had to pull back a bit, I couldn’t really see the terrain and couldn’t give it 100 percent,” he explained. Knowing this to be the case, there would be no letting off the gas for Corey Peters on run two.

The cloud began to lift just in time for the second runs. With start order determined by first run times and the fastest racers in each category last to run, Corey Peters was the final man on course. As expected, Tyler Walker had pushed through with a fast second run and was the man to beat.

Starting out on run two Corey explains: “I was a little round (in the turns) in the mid-section and not super-fast but I knew once I came off the pitch I could really rail the ski and generate some more speed for the second half of the course.” His tactics paid off and Corey clocked a combined time of 1:24.06s to take the win ahead of Tyler Walker in 1:24.93s. Andrew Kurka (USA) finished third in 1:27.79.

“It’s always good to ski against Tyler,” says Corey. “We’re pretty similar in terms of speed and there’s a bit of friendly rivalry which helps push our level of skiing. He got me in Aspen at the start of the last northern hemisphere season when he won the NORAM (North America Cup) on his home turf.”

Patrick Jensen (AUS) was the only competitor in men’s visually impaired, finishing his two runs in a time of 1:51.79s.

Jae Rim Yang held on to her speed to win the women’s visually impaired.

Kiwi skier and newcomer to racing Aaron Ewen (Tuakau) also competed in the sitting class. He successfully made it through his first run but posted a DNF on run two. “It’s only my second ever time through the gates, I’m just really happy to be getting some experience,” he explained.

Racing continues tomorrow (Thursday) at Coronet Peak with the IPC Snow Sports NZ National Giant Slalom Champs where New Zealand’s Adam Hall will be chasing another podium finish following his win at the IPCAS Southern Hemisphere Cup Slalom held yesterday as part of the Audi quattro Winter Games NZ at the start of the week. 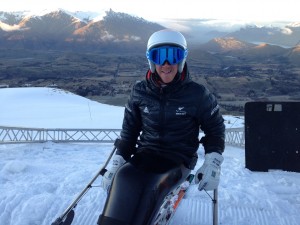