Aspen, USA (1 March 2016) – Sit-skier Corey Peters (New Plymouth) has claimed his “most satisfying win of the season so far” taking first place in the Downhill at the IPC World Cup Finals in Aspen today.

Over 50 athletes from 15 countries are in Aspen for the speed World Cup Finals which run from 1 – 4 March and include two Downhill and two Super-G races.

Corey Peters faced a forty-minute hold in the start gate when a French athlete crashed in the run before his. The race organisers made the decision to move a few gates to make the track safer and a course report was given to the athletes but there was no opportunity for visual inspection.

“That tested my composure,” said Peters.

However, once out of the gates, Peters put together a stellar run and stopped the clock on 1:13.62s, 0.27s ahead of Canada’s Kurt Oatway in second. Akira Kano (JPN) finished third.

“It’s really satisfying to take the win today. It’s been a trying last week or so,” explains Peters who posted three DNFs in the World Cup Technical events (Giant Slalom and Slalom) last week. Even the build-up to today’s race was far from ideal. “The Downhill training runs didn't go well, I kept crashing in the same spot. But today, the day that counted, I managed to put it down clean and fast.”

Peters has enjoyed success in the Speed events of Downhill and Super-G this season and has finished on the podium at four out of five World Cup races so far. He is also the current World Champion in both disciplines.

This is Hall’s second medal at the World Cup Finals; he claimed gold in Slalom last week.

A technical specialist, Hall only began focusing on Speed events last season and is excited by the progress he has made in the Downhill. Today was the first time he has reached the World Cup podium competing in this discipline.

“I’m pretty ecstatic to achieve such a result after taking up speed seriously just last season. It was a great day again,” he commented. “It feels good to be up on that podium in an event that is, I guess, the craziest, especially after crashing in Downhill at the World Champs last season and sustaining a concussion. I’m happy with the progression and where I am heading into the second downhill race tomorrow.”

Racing continues in Aspen tomorrow with another Downhill event.

Results will be available at www.paralympic.org/alpine-skiing/calendar-and-results 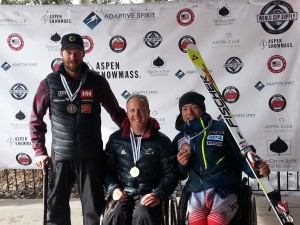