Cold temperatures and early morning fog made for a challenging start but the hardy young competitors – aged from 5 through to 18 years old – took it all in their stride and once again impressed the judging panels with high level tricks and a huge amount of determination. For many, this is the fifth consecutive day of competition.

“That was probably my favourite event of the whole Junior Nationals and I’ve never done pipe before,” said Year 5-6 competitor Dylan Brown (Wanaka).

Australian competitor Oskar Schulz had the trick of the day in the smaller pipe, boosting way up above the lip and stomping his left flair. Also incorporating stylish back to back both way 540s, his was the winning run in the highly competitive Year 5-6 boys’ group. Coming away with four medals after his week of competition, Oskar described it as “the best week I’ve ever had.”

Over in the Olympic pipe Maggie Little (Wanaka) led the charge amongst female competitors, landing solid 360s for the win in the Secondary 11-13, and adding to her gold medal won in the age group slopestyle earlier in the week.

The Harrington brothers outclassed everyone with amplitude and refined pipe technique. Luca took the win in the Intermediate 7-8 year group, boosting and spinning down the pipe. In the 9-10 year group Ben came out of the gate with enormous amplitude spinning cork 9s and 10s on the right wall. He was in the lead after the first run; however, Jed Ebsworth, with the last run in the 9-10 age group, impressed the judges with a technical combination including spinning both ways and a switch 7 at the bottom. After much deliberation the judges awarded Jed the win due to his variety of spinning directions, spinning both ways and including a switch trick.

The U14 and U18 Open Slopestyle events provided those skiers and snowboarders with high end tricks with the opportunity to showcase their skills on a truly challenging stage. Competitors could opt for either the U14 event held in Antlers Alley or tackle the Big Bucks Park in the U18 event.

Having dominated their age group events earlier in the week, it was no surprise to see Tiarn Collins (Queenstown) and Zoi Sadowski Synnott (Wanaka) top the score sheets in the U18 Snowboard Slopestyle.

Tiarn threw down with a cab 9, front 10 and back 10. It was a convincing win but Rakai Tait also put down a solid run, surprising the judges with a big front 9 tail grab over the third jump to secure second place. Zoi stomped her run with a cab underflip, front 3 and a big back 3.

11-year-old Zephyr Lovelock won the male U14 snowboard competition with a back five to switch back five and a board slide through the Mons Royale up flat down rail. He was the only U14 competitor to hit this feature. Only two girls competed in the U14 snowboard event and Mila Stalker took the win with a solid run which included the technical rail features.

Zoe Smith smoked the girls’ U14 ski slopestyle with a very technical run including a nice combo of 180s and 360s on the jumps and hitting the Mons table. The U14 boys were a tight scoring group and harder to separate. Gustav Legnavsky took the win with a backflip and 720, followed by two rail slides. He was followed closely by Finley Melville Ives who had a cool rail line but lost points for a backslap on the third jump doing a 720.

U18 girls was a small field but Gia Hughes impressed by spinning 360s over jumps and showing great style. Finn Bilous, competing in his final year at Junior Nationals, went out on a high note winning the men’s U18 open slopestyle with back to back nines and a right dub 10 mute to Japan. A couple of the younger competitors were nipping at his heels with Ben Harrington earning his second medal of the day with second place and Jasper Bloomfield third.

The week’s competition will conclude with a prize giving ceremony at the Lake Wanaka Centre tomorrow (Saturday). Photos and footage from the event will be shown and the overall prizes awarded. 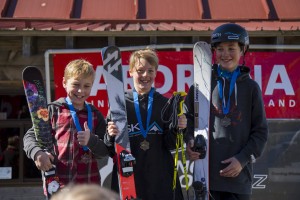