We were greeted with clear skies and an incredible sunrise at Cardrona this morning for Day Three of the Torpedo7 NZ Junior Freestyle Nationals.

Always a hotly contested event, the 2021 Salomon Halfpipe competition saw all the competitors bringing their 'A Game' to the Olympic and International halfpipes. With a busy day ahead of us we started early, with the older divisions competing in the Olympic Halfpipe dropping in for their first judged runs at 8am.

The competitors put on a fantastic show as they made their way down the 22-foot high Olympic Halfpipe, impressing judges and wowing the crowd with a variety of tricks and plenty of amplitude.

Stand out performances came from twin brothers Campbell and Finley Melville Ives (Wanaka Snowsports Club), who compete in the Boys U16 Freeski and Snowboard divisions respectively.

Campbell Melville Ives won the Boys U16 Snowboard division with a high score of 96.00 on his second run, 10 points clear of his nearest competitor. When asked the key to his success he said “I had consistency in my amplitude, a variety of switch and regular riding and spun in all four directions.”

Campbell’s brother Finley had a crash on his first hit in run one, meaning he had to lay it all on the line for run two. Proving that the pressure was no problem for him, Finley laced together a technical run with great amplitude to claim the top spot in the Boys U16 division with a score of 92.33.

Head Judge Tori Beattie explained “Fin opened with a big left 900 to right 1080 combination. The pressure was on [after run one] and he came back and landed a really high level run, it was by far the stand out run for the day.”

In the Girls U16 Ski division Sylvia Trotter (Wanaka Snowsports Club) put down an impressive first run, showing the judges plenty of variation by spinning back to back 540s at the top of her run. “My day was really fun hanging out with all my friends. I was really happy to put down back to back fives in my run today and I was also pretty stoked to land a switch 360 in there too.”

Our younger age divisions competed in the International Halfpipe, a slightly smaller halfpipe that is the perfect size for our littler competitors.

International Pipe Head judge Luke Hetzel said “it was fantastic to see our younger athletes getting out there and giving it their best in the International Halfpipe. The future of halfpipe skiing in New Zealand looks like it is in good hands, congratulations to everyone who competed today.”

The competition continues at Cardrona tomorrow (Thursday 7 October) with the Salomon Ski and Snowboard Slopestyle events.

The Cardrona Snow Sports NZ Junior Freestyle Nationals run from the 4th to the 8th of October 2021. 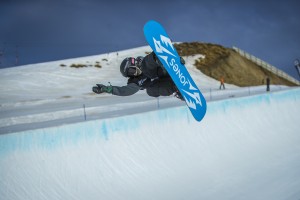