Christy Prior Qualifies in 1st Place at Olympic Test Event

Having enjoyed two good training days getting used to the challenging course, it was Prior who set the pace in her first run navigating safely through the upper rail sections and landing a trademark frontside rodeo 720 melon, to stylish backside 180 to cab 720 combo on the jumps.  It was the first time Christy has landed a cab (switch frontside) 720 in competition, something that she was especially happy with given the work she and her coach Sean Thompson had been putting into it during recent training at the team base in Colorado.

With a score of 90 points Christy was way out in the lead, the only person getting close was 2014 Olympic gold medallist Jamie Anderson of the USA who scored 86.75.

Knowing that the job of qualifying was in the bag, Christy had the luxury of using her second qualifying run as a training run for the upcoming finals.  Christy nailed a perfectly executed front blunt same-ways manoeuvre on the first down rail, added a 360 to the 3rd rail feature, boosted a huge method off the first jump and upped the ante on the second jump spinning a backside 540.  Coming up a little short on the back 5, the run did not improve her score; however, she is primed to lift her game and finishes the day in strong contention for the top spot in finals.

Two out of two 'elite podium' members of the NZ Park & Pipe Team - Jossi Wells and Christy Prior will be in action in what will be a very exciting finals for NZ with Freeski on Saturday and Snowboard on Sunday.  Both athletes are very happy with the test of the 2018 Olympic course and have found that it suits their riding styles and will allow them plenty of opportunity to showcase their strengths! 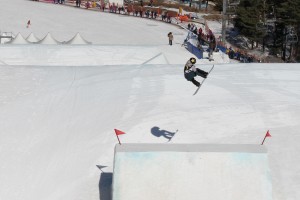